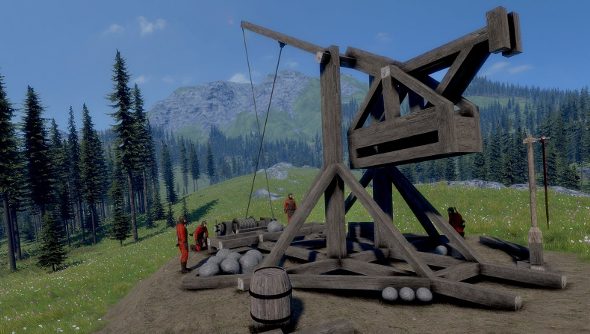 Keen Software House, developers of Space Engineers, are dabbling in Early Access once again, before Space Engineers leaves space dock. Medieval Engineers will be popping into existence on Steam next month, on February 19th, joining its sci-fi cousin.

Medieval Engineers will turn back the clock, taking away its engineers’ space suits and spaceships, replacing them with wooden contraptions and big ol’ castles and cities. There will be terraforming and mining, along with siege warfare and hand to hand combat for the more blood-thirsty among you.

The developers say that, as with Space Engineers, the game will follow the laws of physics. All the tools used by players will be historically appropriate, to boot.

Working on two Early Access games sounds like a big risk, but Keen’s CEO and founder doesn’t believe it will have a negative impact on either game’s development.

“Getting real feedback from our Community is our topmost priority and we are looking forward to the moment that our players will get their hands on the game and send us their first suggestions” said Marek Rosa, CEO and Founder of Keen Software House. “We want to assure our players that our team will do its best to keep up the hard work, as we have done up until now with success, and that developing two Early Access games at the same time will not have a negative impact on their development. We invite all players to give us their feedback and suggestions and help us create the best games possible!”

What do you lovely lot reckon?