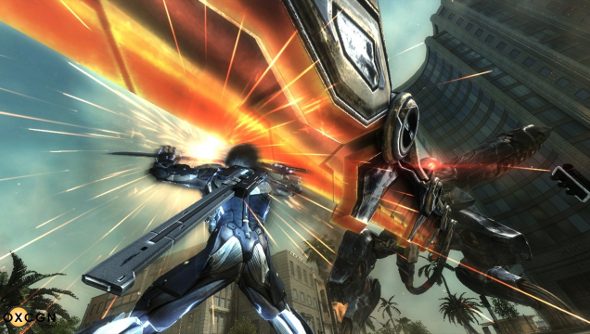 You could be forgiven for completely forgetting that Metal Gear Rising: Revengeance was meant to be coming to PC at some point. It seemed like it definitely was coming when it first launched on consoles, and then… nothing. Not a peep. It didn’t even seem like it had been cancelled; it was just erased from the collective memory of the human race. Which was a shame, because it’s actually a rather splendid action game entirely absent the hour-long over-exposition inherent in the main series. Sadly it’s also absent Snake’s lovely posterior.

But, out of the blue, Kojima Productions staff revealed that it is indeed still coming to PC. Any day now, in fact, it will appear on Steam. We will get our sexy cyborg battles, my friends. It’s going to be a grand Christmas.

During the last Kojima Productions podcast, staff were asked what the hell had happened to the port. So at least one person still remembered it. In response, staff explained that it had not actually been cancelled and that it would arrive sooner than we might anticipate. To be honest, that would require time travel, but okay. “It’s in the final stages right now. You’ll be seeing it pop up on Steam any day now.”

This is any day. Monday. But still nothing. Looks like we’ll have to check back tomorrow.