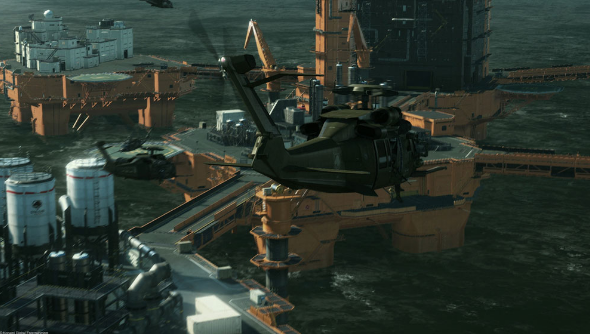 E3 was all about Metal Gear Solid V’s open world and the opportunities available out in the field. Gamescom brings us back home to Snake’s Motherbase – a massive complex out at sea that is the base for his Diamond Dogs army. This new 30 minute video walks you through the base and its various functions, showing how it can be expanded and upgraded.

The Motherbase has wings for things like Research and Development, where new weapons and gadgets for missions can be created. The base is a barracks for your army, which is made up of soldiers you recruit directly from the field, such as captured enemies or POWs. Your reputation may also attract volunteers. These recruits will physically wander around Motherbase, and will salute as you approach. If the population becomes too high, you’ll have to expand.

Staff will also get in scraps and cause outbreaks of drama in the ranks, so you need to keep them in line at all times.

Motherbase also has a variety of training missions to hone your skills in.

Most exciting, the base is also home to a dog that will start out as a puppy and grow over the course of the game. Absolutely adorable.

There’s a great deal of information in the video, so if you’re looking to be ultra prepared for the game it’s very much a lecture you’ll want to attend. It also dives into the use of Motherbase in Metal Gear Online, which will be released in January 2016. The singleplayer campaign of Metal Gear Solid V will release September 1st.