As if base insurance in the latest Metal Gear Solid game wasn’t odd enough, now it appears Konami have introduced an expiry date on MB coins – the Phantom Pain’s in-game currency – that makes them invalid if not used within a six month time period.

Come see if Snake found a place on our list of best PC games.

Currently, the restriction is limited to players situated in Japan and playing on Steam, but what this essentially means is that failing to spend MB coins – whether accumulated in-game or purchased with real money – will render them null and void after just half a year.

The limit was put in place as of yesterday, February 17, which means if you’re a Steam player in Japan, and you’ve bought any MB coins since, you’ve got until August to make use of them.

As it stands, Konami haven’t offered any reason as to why they’ve chosen to impose such restrictions on microtransactions, nor have they suggested the method will be applied to other regions. 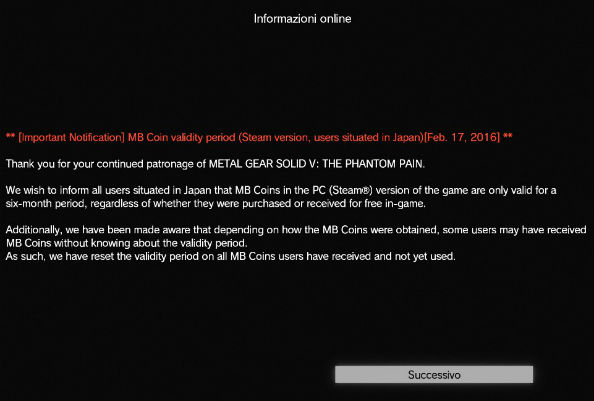