Konami are helping to fund and promote the creation of a specially designed prostehtic limb for one-armed gamer James Young, designed after Snake’s own in MGS5. They’re doing so in association with the Alternate Limbs Project, which helps to create stylised, fashionable appendages for the impaired, making them out of crystals, embedding diamonds – that sort of thing. They’ll be showing it off at an upcoming bodyhacking conference in Texas.

You can read more about it at the official site, with the latest developments being that the hand is beginning to go from the design stage into becoming bionic. At the Bristol Robotic Laboratory, they’re teaching it to do these things:

Because it’s the future, this shouldn’t terrify you at all. One of the cofounders at the lab says the limb is “like no other” and is excited to see how the reveal at the first BDYHAX bodyhacking and biohacking convention goes down later this month. For the hand part, they’ve gone with the classic Solid Snake red, always my personal favourite colour in MGS5. 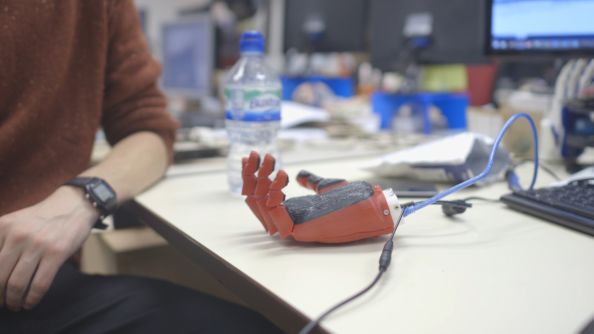 All fairly rad, to be honest. It’s dumb videogame marketing at its finest, but it’s pushing technology forward and helping someone who has had more than their share of bad breaks. I’m all for it. You can follow James on Twitter for more info about what he’s getting up to, along with the Phantom Limb project itself. The Alternative Limb Project is also worth checking outand the super cool stuff they make like spike legs, feather armour and snake arms.