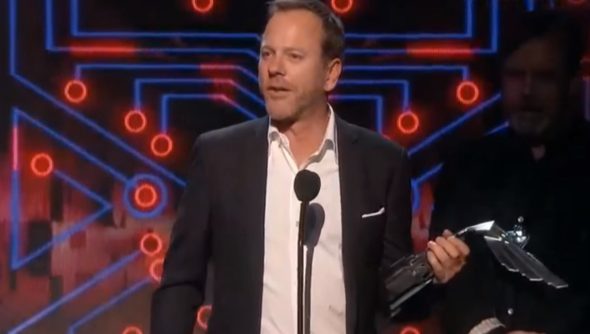 Konami’s bizarre relationship with Metal Gear master, Hideo Kojima, has been one of the strangest videogame dramas of recent years. Before Metal Gear Solid V: The Phantom Pain had launched, the publisher started sidelining the developer, removing his name from the game (temporarily) and generally being evasive about his role in the company. This has continued post-launch, with increasing strangeness.

Now the publisher won’t even let him accept awards. It’s gotten that weird.

Last night, at The Game Awards, Kojima was expected to show up and hang out with his bro-bud Geoff Keighley and maybe accept an award for The Phantom Pain. But when the latest Metal Gear installment won Best Action/Adventure game, Kojima was nowhere to be seen, leaving the latest voice of Snake, Kiefer Sutherland, to accept the award on his behalf.

“As you noticed, Hideo Kojima is not here with us tonight and I wanted to tell you a little bit about that. Mr. Kojima had every intention of being with us tonight, but unfortunately he was informed by a lawyer representing Konami just recently that he would not be allowed to travel to tonight’s award ceremony to accept any awards.”

Unfortunately, Kojima still has an employment contract with Konami, so they are still able to do these absurd things, while still trying to make everyone believe that he is merely on holiday. Good for Keighley, not letting this nonsense be brushed under the rug.

This isn’t even the first time. The Phantom Pain won another award recently, at the PlayStation Awards ceremony. Instead of the man behind the game accepting the award, a Konami PR representative accepted it instead.

When Keighley explained the situation, the audience started to boo. He then perfectly summed up what most of us were probably thinking.

“He’s under an employment contract and it’s disappointing and it’s inconceivable to me that an artist like Hideo would not be allowed to come here and celebrate with his peers and his fellow teammates.”

You can watch the unfortunate mess unfold in the video below, courtesy of Kotaku.

I think I’ll do a little dance when Kojima’s contract finally ends.