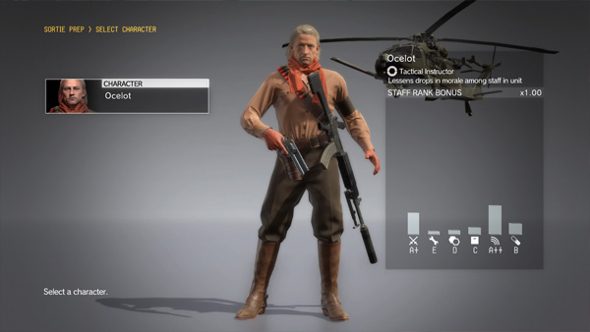 Metal Gear Solid V: The Phantom Pain’s sexy Russian cowboy, Ocelot, has been stuck at Motherbase since the game launched, unable to enjoy the thrills of invading other players’ Forward Operating Bases. This unfortunate state of affairs is about to end, however, as the revolver-loving soldier will be available for FOB assaults with the August update.

Speaking of gun nuts, here are the best FPS games on PC.

You won’t be able to change Ocelot’s appearance, but he has a camouflage bonus, can reload weapons faster and, more importantly, can dual wield his pistols. And since Ocelot loves a good trickshot, he can use ricochet bullets on marked targets.

Along with the introduction of Ocelot, the update brings with it new abilities for the wormhole generator, which is now harder to destroy and automatically extracts the player when they’re in critical danger.

And since it’s summer, new swimsuits and swimsuit colours have been added for both male and female soldiers, and they look absolutely ridiculous. The swimsuits have no camouflage value but they do at least make the wearer lighter on their feet.

The update will be available from August 1.