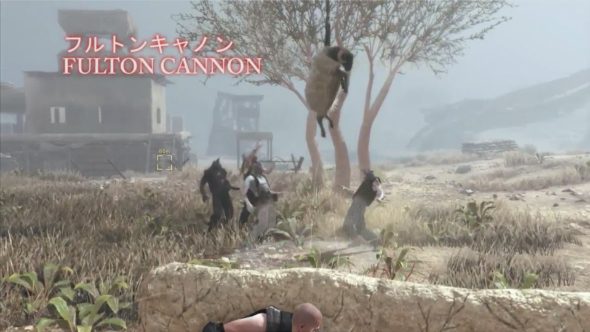 For more excellent zombie games on PC, look no further.

The co-op zombie game makes use of the Metal Gear Solid V engine to first see four players infiltrate a base, stealth attacking loitering zombies with crystals growing where their heads used to be, in what appears to be an alternate dimension. As part of these sneak attacks, one of the demo players used a modified Fulton device to hang a sheep in front of a crowd of zombies in order to drop a molotov on them all. Then zip the sheep out through a portal, or wormhole. You can also Fulton dead zombies through these portals, too.

The main goal appeared to be to set up a tower maintaining an open portal to the soldiers’ original dimension to send a distress signal, while also bringing in supplies to help fend off the horde. After taking a base by stealth and setting up the tower, Metal Gear Survive becomes a wave defense as zombies spawn in from every direction around the base requiring barricades to be constructed.

After first crafting the barricades at a table in the base, players then dropped them in place via more wormhole magic allowing them to hold off the mobs a little longer. Every player had a different set of weapons, including a polearm, machete, bow and arrow, automatic rifles, pistols and shotguns, though it wasn’t clear if they were set per character or customisable loadouts.

You can also portal in emplaced weapons, such as machine gun turrets, to help thin out the zombie numbers before they reach your barricades. In all, it looks like if you played Metal Gear Solid V the correct way, and missed out on what combat feels like, then here’s your chance to cut loose on a bunch of mindless creatures.

Metal Gear Survive will be arriving on Steam sometime in 2017. You can see the gameplay portion of the stream below.