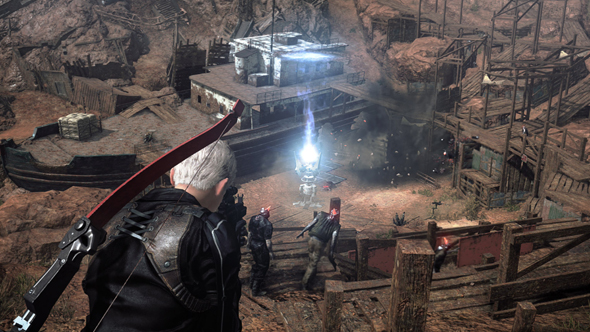 Metal Gear Survive will release on February 20, 2018. The release for the survival spin-off from the Metal Gear franchise in the US will be followed up two days later with a European release date of February 22. The game will be available via Steam, priced at £34.99.

For more of what Metal Gear Survive probably won’t provide, check out the best stealth games on PC.

In a tweet last night, Konami confirmed the game’s release date, as well as the fact that the game is now available for pre-order. The tweet, which you can see just below, also lists the pre-order bonuses, which include four gold-plated weapons, four metallic ‘survival’ scarves, and the ‘Boxman’ accessory, which harks back to Metal Gear Solid’s ‘The Orange’ cardboard box.

Metal Gear Survive was originally scheduled for a 2017 release, but was pushed back to allow more time to polish the game. We got our hands on the game at this year’s E3, and here’s what we thought.

Original story, October 24:Some kind of announcement is coming for Metal Gear Survive tomorrow, according to the official Metal Gear Twitter account. The exact nature of this announcement is totally mysterious, but that definitely won’t stop me from engaging in some conjecture.

Given that the tweet accompanies a Survive logo and MGSurvive hashtag, it’s safe to assume this announcement won’t have much to do with the main series, and instead will be all about this particular spin-off. That probably shouldn’t need saying, but Metal Gear fans are so eager to brush off Survive’s existence that it’s worth reiterating.

Instead, we’re likely to see either some new gameplay details or a more specific release date than the vague “early 2018.” Given that Survive always seemed like a weird attempt to shoehorn Metal Gear into the popular survival genre, it’s no surprise that plenty of folks are already joking about the game getting a Battle Royale mode – and it’ll be equally unsurprising if that actually turns out to be the case.

I can say one thing with certainty, though: the folks over at r/NeverBeGameOver will continue to be very disappointed.