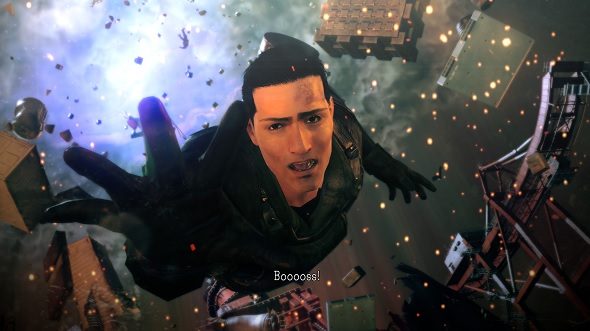 About six hours into Metal Gear Survive, one question works its way through the general confusion engendered by a setting filled with crystalline zombies, matter-transporting wormholes, and alternative realities: is this even a Metal Gear game?

You will want to play Metal Gear Survive with friends. Trust us.

The zombies and other reality-bending gibberish would suggest that, no, Survive is something different. As strange as the Metal Gear series is (remember the nanomachine-powered vampires, fourth-wall-breaking S&M psychics, and surfeit of superpowered clone soldiers?) it has always been grounded, too, in something that resembles reality. Every backflipping cyborg ninja is paired with a refreshingly mundane conversation between two characters about, say, nuclear non-proliferation treaties or the horrors of modern warfare. Boss fights against geriatric, half-chameleon snipers or actual ghosts are broken up with discussions of Cold War politics. The fantastic and the real have always been given equal weight. 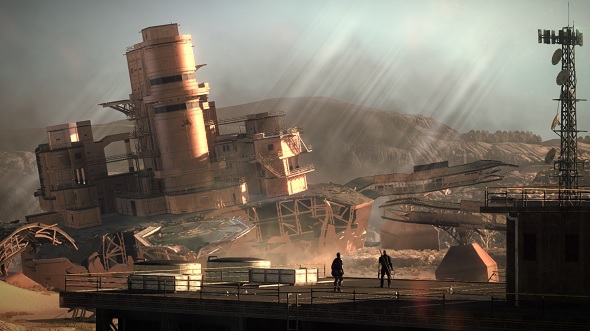 Survive makes at least a passing attempt to keep some of these elements in play. In the game’s introductory sections, you learn that the first documented sighting of the zombies you are sent to fight occurred during the Vietnam War, and that the American military contained and covered up their existence as part of the conflict. The mystical ‘Kuban’ energy that grows in glassy clusters around Survive’s landscape and animates its undead creatures is quickly incorporated into a conspiracy that involves government black ops and clandestine political agendas. Everything is wrapped up in decidedly on-the-nose Dante references, with an AI called Virgil and heavy-handed references to your journey through the wormhole as a trip into the Inferno’s City of Dis.

All of the pieces, from the ludicrous to the ordinary, are in place to match – in theory at least – Metal Gear’s trademark tone.

And yet there is still something a little bitoffabout the result – somehow, it is a few shades away from fitting into a decades-old series that was unafraid to change up its themes and mechanics with each new entry. Playing Survive, jogging across a desert world dotted with decaying metal structures and piles of industrial refuse, closely resembles the moment-to-moment experience of 2015’s Metal Gear Solid V: The Phantom Pain. The immediately recognisable sound effects – metallic clicks when scrolling through menus and the spine-jolting synthesizer yelp of alerting a nearby enemy – are all here. The action, though it features more monsters than human soldiers, should be familiar to anyone who played Survive’s predecessor. 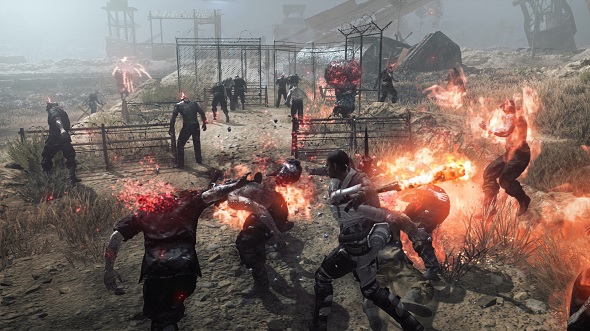 What is not the same, however, is the rhythm of the game – Survive centres on repetitive resource gathering – or the worn-in quirks of absent Metal Gear creator Hideo Kojima’s divisive directorial touch. There may be a mission handler with the colourful name ‘Goodluck’, but he is too flat to convey the kind of personality needed to stand alongside the outsized characters who populate every other Metal Gear game. The story so far may be more elaborate than it needs to be for a game about killing zombies in a purgatorial wasteland, but its complexity seems to exist only for the sake of being complex.

It feels like the essence of Metal Gearhasbeen identified by the inheritors of its legacy – but only the aesthetics surrounding that essence have carried over. Despite the overall hollowness that accompanies this, Survive’s oddities are, partway through the game at least, compelling in their own right. Its focus on oddball story details and a snappy combat system – all enlivened by the animation, visual, and audio framework it inherits from The Phantom Pain – make it a distinct change of pace from other action games. Even so, while it finds success in emulating these surface trappings, simply shuffling around in the same clothes as the series it is named after does not earn it a place in Metal Gear’s canon.