Metro Exodus’ endings come in two flavours: good and bad. Following the pattern 4A Games established in the two previous games in the series – 2033 and Last Light – the climax to Artyom’s journey out of the titular underground networks he once called home is a binary one based on the decisions you make. However, it isn’t always clear how your decisions impact the denouement, and by how much, so we’re going to help you fill in the gaps.

What constitutes the bad or good Metro Exodus ending is fairly clear when you get it, but it isn’t always obvious quite how your actions contribute to it. So, if this Russian-based horror game ended badly and you want to rectify your egregious mistakes for next time, there are a few ways in which you can be a more considerate survivor. Alternatively, you might want to let yourself off your previously kind-hearted leash and listen to the devil on your shoulder a little more for next time.

Either way, with this Metro Exodus ending guide, we’re going to break down exactly what happens in both conclusions and the kind of decisions you need to make to ensure you round off Artyom’s post-nuclear narrative in the right way for you. And, obviously, this goes into heavy spoiler territory for the end of the game, so be warned. So, let’s get back on track: below you’ll find every Metro Exodus ending and how to get them.

Metro’s morality system is not exactly indistinguishable from the way you would expect to behave if you’re not a raging psychopath. Basically, if you want the good ending, try to avoid killing people – at least the ones who don’t deserve it, anyway. In the context of Metro Exodus, these are people who are not immediately hostile to you – they’ll show a red, rather than a yellow or green colouring on your reticule. Sometimes the people you spare will return to give you missions or just make life easier for you later down the line.

Use stealth and knock hostiles out rather than stabbing them – you’ll save your ammo and health items that way, too. If the quiet approach goes south, at least stop the killing when your enemies give up in fear and always avoid innocent bystanders. Also, approach everybody who will not attack you straight away with your weapon holstered; it’s rude to point, let alone doing it with a firearm.

Off the rails: These are the best train games on PC

Sometimes, however, you’ll know you’ll have made a decision that counts towards the Metro Exodus ending as the games turns to black and white for a few seconds. By that point the decision it’s too late to change, so you can either reload a save or try to adapt your behaviour for next time if you think your actions are impacting your game in a way you don’t want it to.

You should also help out NPCs and your motley crew aboard the Aurora as much as you can. As we pointed out in our Metro Exodus PC review, side missions are initiated naturally: you don’t just approach people with a massive question mark above their heads. Instead, you listen to them patiently and quite a few will give you supplementary jobs to do. For instance, in the first hub, the Volga, the young girl you rescue from the religious zealots asks you to rescue her teddy bear and Stepan fancies himself a new guitar. When they mention both of these items, guitar and toy shapes appear on your minimap. Complete these odd jobs as much as you can for extra brownie points. 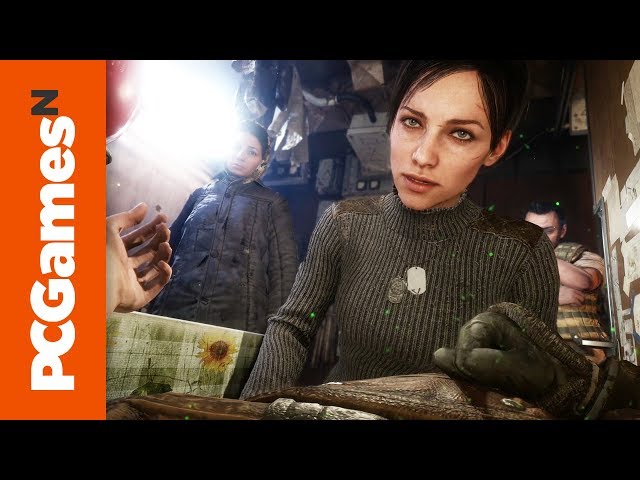 So you’ve ruthlessly obliterated any poor soul that stands in your way of freedom – and, at times, being turned into lunch – but now you’ve got to pay the ultimate price for your crimes. Whichever climax you get, the Metro Exodus ending takes place in the Dead City as you search for medicine for Anna, in a more linear mission that recalls the previous two games.

In the bad Metro Exodus ending, Artyom absorbs a fatal amount of radiation and dies despite valiant attempts to save him via a blood transfusion. The rest of your band live, including Anna and her father, Miller, but your final moments with the series see the camera peel away from your coastal grave as the credits roll. You’ve certainly made it to a nicer home than the Metro but, this time, you’re six feet under it. Swings and roundabouts, we suppose.

The good Metro Exodus ending is largely similar to the bad one, besides one key detail that becomes apparent at the very end: Artyom lives (yay!) and saves Anna with his heroics in the Dead City (double yay!). However, Artyom only dies because Miller sacrifices himself by giving his son-in-law the last dose of anti-rad medicine (boo!). On the plus side, your benevolent hero makes it through and starts a new home for survivors of nuclear annihilation in Miller’s memory. Let’s just hope their food stocks stay more plentiful than some other settlements we’ve visited – we can’t face that weird meaty broth again.