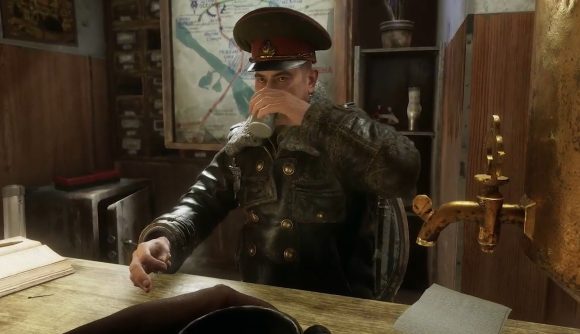 Metro Exodus’ two DLC expansions will put players in control of new characters and new weapons. Developer 4A Games previously revealed the broad details of the expansions earlier this year, but now we’ve got a trailer and a release date for the first release, and we won’t have to wait very long for it.

The Two Colonels launches tomorrow. It follows the adventure of a brand-new character, Colonel Khlebnikov, as he returns to his son for New Year’s Eve. This being Metro, of course, all is not well, and his son’s home is under siege from mutants, aggressive slime, and dwindling supplies of radiation protection. A year later, Colonel Miller will retrace Khlebnikov’s footsteps, armed with a shiny new flamethrower to protect himself from the creatures that dwell in the ruins of the city.

The second expansion will arrive in early 2020. Set in Vladivostok, it’ll put players in the shoes of US Marine Sam, as he attempts to make his way back to the states. Getting through the crumbling city will be no mean feat, however, and it’ll take all of Sam’s military nous to get home.

Check out the Two Colonels trailer below.

Given the Metro Exodus sales, it’s not too surprising that 4A’s DLC plans seem to be relatively robust. The latest game in the series sold more than twice as many copies as its predecessor.

The two updates will be available individually, or as part of an expansion pass, which you can order now via the Epic Games store. Metro Exodus is also available through the Windows store and Xbox Game Pass for PC.