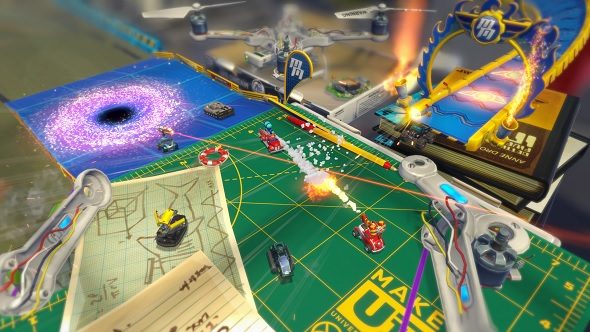 Announced back in January, Codemasters have finally released some gameplay footage of Micro Machines World Series. Rather than focusing on standard races, this short trailer highlights the game’s Battle Mode, where 12 players vie to be the last tiny vehicle standing.

Burn some virtual rubber with our list of the PC’s best racing games.

Similar to games like Twisted Metal or Cel Damage, the Battle Mode in World Series has players driving around in a massive arena, rather than sticking to a normal track. Based on locations you may find round the house, the trailer shows off players battling in the back garden, on top of the kitchen hob, inside yer da’s workshop and in a child’s playroom.

Each arena is full of household hazards like sprinklers that short out your motor, snooker balls that crush you flat and even hungry hippos that gobble you whole. Codemasters are certainly putting the Hasbro partnership to good use with NERF weapons, G.I. Joe vehicles and the aformentioned famished hippos appearing in Micro Machines World Series.

Based on the trailer, Britain’s loudest man Brian Blessed is set to act as the game’s announcer. There’s something inherently silly in having this booming voice narrating the destruction of matchbox cars, which is what I think Codemasters are going for. Speaking of silly, the weapon spread in Micro Machines World Series goes from simple NERF guns, right the way up to miniature black hole cannons. I’d be careful of any child who got a set of these toy cars for Christmas.