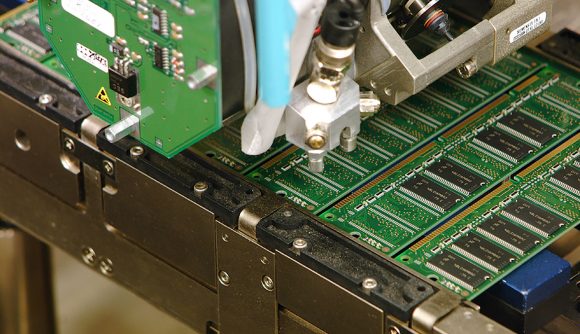 DDR5 is here! US memory manufacturer Micron has begun sampling its next-generation DDR5 Registered DIMMs (RDIMMs). This high-performance system memory is capable of driving performance 1.85x that of DDR4 – and could be the end of pesky memory bottlenecks for heaps of systems.

While currently only intended for the server and high performance computing markets (boo), this initial DDR5 sampling run comes as precursor to a wider release across all computing segments. I wouldn’t hold your breath, or forgo an upgrade to one of the best CPUs for gaming while you wait, but we will be privy to DDR5 in desktop gaming PC market this side of 2025… probably.

Micron’s announcement is a convincing glimpse of things to come. Built on the 1znm process, DDR5 RDIMMs double the memory capacity of their forebears, improve reliability, and offer up to 85% faster performance.

With DRAM and NAND memory prices sharply declining in price over the last year, the shift to DDR5 and a new wave of compatible products could become top priority for manufacturers seeking new income to keep their CFOs happy.

When will DDR5 be available in gaming PCs?

DDR5 is still a long way off mainstream adoption, and we’re unlikely to widespread adoption this side of 2023. Nonetheless, we’ve been surprised before. AMD’s 3rd Gen Ryzen processors led the way with PCIe 4.0 adoption, and could once again pave the way for DDR5 and PCIe 5.0 in the future, too.

Header image courtesy of Micron (and also definitely not DDR5…).