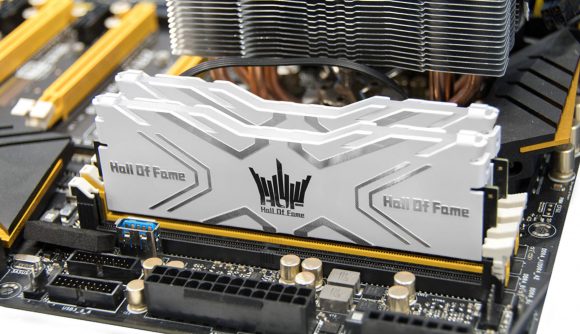 Galax might not be the first company you think of when you’re looking for the best gaming RAM, being more prominent in the enthusiast graphics card market, but it’s preparing its own DDR5 memory. The brand teased that it recently received DDR5 chips from Micron, meaning we should see the next generation of Gamer and Hall of Fame (HOF) series RAM in the near future.

It’s not clear how far into development Galax is with DDR5 RAM, but the batch pictured in the Facebook post only contains 100 DRAM modules, which is nowhere near enough for mass production. It’s a good sample size to test the memory speeds, timings, and stability, however, which would match the rumoured timelines for Intel and AMD to release compatible platforms later this year.

Galax already offers DDR4 RAM, with its HOF Extreme limited edition kit capping out at 5000MHz. DDR5 has a lower voltage and higher data rates that will reportedly start at a base clock of 4800MHz, but has a much larger ceiling, supporting frequencies as high as 8400MHz. We’re not quite sure where the DDR5 HOF kits will land in terms of speed, but the company’s reputation for overclocking means we could see something towards the upper limit.

Following in the footsteps of Asgard, Galax is the second company to confirm it’s using Micron DRAM modules and it certainly won’t be the last. Crucial, HyperX, and even Corsair could renew their partnership with the manufacturer to work on their own DDR5 sticks, although any of these brands could use Samsung or SK Hynix instead.