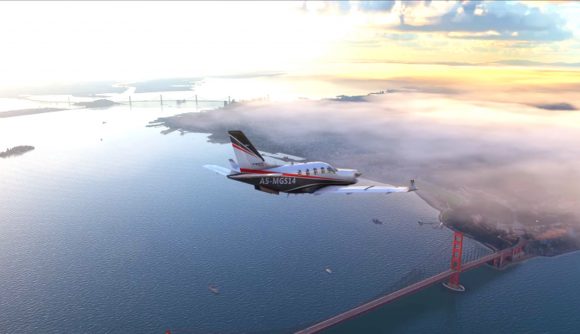 Players can soon strap-in and take flight as alpha testing for Microsoft Flight Simulator 2020 will be open twice between now and the end of November. Sign-ups for the first-round will end next week, with confirmation arriving October 17 before gameplay starts October 24. The dates for the November session are still to be determined.

If the actual flying isn’t enough to tantalize you, the team have started a subscriber-only vlog series for pilots who sign up to be part of Microsoft Flight Simulator’s Insider Program. The videos, entitled ‘Feature Discovery’, explore the creation and development of the latest installment of the popular piloting sim.

The first entry – which has been ripped and uploaded to YouTube (cheers, PCGamer!) – discusses recreating our world such that you can fly from Mount Everest to the house you grew up in and back again. Recreating the Earth so specifically was no easy feat, involving enormous piles of data – two petabytes, in fact – that included two million cities, 45,000 airports and every road and mountain on the planet. This remarkable level of detail unlocks all new ways of flying aircraft in the game. “Not only do you have the entire world, but it also matches the real world, and the big consequence of this is that VFR [Visual Flight Rules] is available every,” Lionel Fuentes, Lead Engine Programmer, explains in the video. “Visual Flight Rules is a way of flying your aircraft by relying on visual cues in the environment, like where you see a city or a river, and you can deduce where you are going.”

Beyond that, Microsoft Azure cloud-streaming technology is being used to generate even more detail. Using Azure, minutiae such as tree placement, up-to-date building placement and the colors of rooftops will be accurate, allowing for lifelike recreations of the environments you’ll be zipping over.

Fuentes uses an example of an island near New Guinea, saying that if they made that island without the assistance of Azure, it would be a little flat looking, whereas with Azure, the forestry and housing is exactly as it is in real life. Fuentes does go on to reassure players concerned about bandwidth that an offline mode will be available that only uses the built-in data.

You can sign up until next week if you want to be among the first to jump into the cockpit of Microsoft Flight Simulator 2020. If you’d like to practise your piloting in advance, check out our guide to the best plane games and the best simulation games on PC.