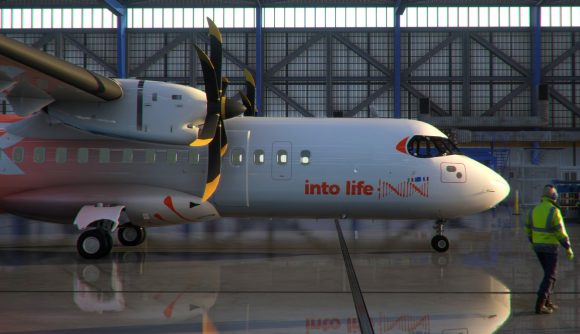 Microsoft Flight Simulator will be getting a new passenger aircraft next year. The French and Italian ATR 42, a turboprop passenger airliner, is in development now thanks to a partnership between developer Asobo Studio and aircraft manufacturer ATR.

There are two variants of the -600 series planned for addition to the simulation game. First is the ATR 42-600, a 42-50 seat airliner, which was first announced in 2007 and features two Pratt & Whitney Canada PW127M turboprop engines, capable of producing 2,619 eshp a piece. The aircraft also features a ‘glass cockpit’ flight deck with five wide LCD screens replacing the older EFIS flight instrument system. The engines have a ‘boost’ function that delivers additional power when needed – handy for short runways, high altitudes, or hot conditions.

The other variant that’s on the way to Flight Simulator is the 72-seat ‘stretch’ version, designated the ATR 72-600. Like it’s shorter sibling, it sports the same -600 series improvements in instrumentation and engine technology, but its longer fuselage means it can carry more passengers and cargo.

It’s getting increasingly difficult to tell screenshots of Flight Simulator apart from real-world photos, as you can see in the tweet below:

Who's excited for the new @ATRaircraft coming to Microsoft Flight Simulator next year?

Where will you fly this magnificent aircraft? pic.twitter.com/4uPd8z01A6