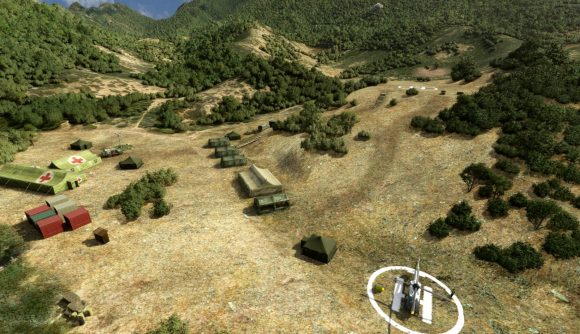 If you’ve been tooling around the friendly skies of Microsoft Flight Simulator in the Bell 47 helicopter created by third party developer FlyInside, you may have found yourself humming the theme song to the TV series M*A*S*H, which featured the distinctive bubble-canopy aircraft prominently in its opening credits. Now, thanks to a free mod, you can land on the film set just as it was during the show’s production run.

M*A*S*H – The film set is a free mod for the simulator game by Photosbykev that adds custom structures and textures to California’s Malibu Creek State Park, where both the film and television series were filmed between 1970 and 1983. While M*A*S*H was set near Uijeongbu, Korea, the rugged mountains along the Pacific coast west of Los Angeles served as the show’s on-screen backdrop for its many outdoor scenes.

The mod includes two helipads, a handful of army hospital tents, several trucks, and some shipping containers, laid out the way they appear in M*A*S*H’s opening sequence. It’s a treacherous area to land in anything other than a helicopter, but fortunately there’s a short dirt strip located about 500 metres to the west if you’re in a fixed-wing aircraft.