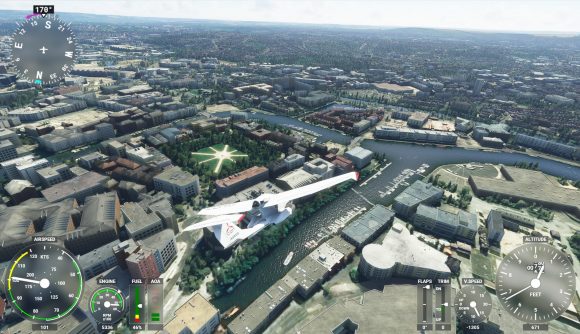 Asobo released its fifth big update to the PC version of Microsoft Flight Simulator alongside the Xbox Series X / S release yesterday, and it looks like the performance gains promised from the developers last month are living up to the hype, seriously helping to boost fps. It’s particularly welcome in a game that stretches even the best gaming PC to its limits.

A Reddit megathread has many commenters singing their praises on the update, with users reporting big gains over the previous version without any change in their graphical settings. One Redditor reports their RTX 3060 Ti-based rig going from an average of 30fps over New York to an average of 60fps, while all the settings stay cranked to the max. These improvements aren’t just limited to the newest GPUs either, as an AMD Radeon RX 570 user reports a doubling in fps too.

The Verge has benchmarked the new update, and at 1440p on ultra settings, its RTX 3080 Ti test bench went from an average of 45fps before the patch to an average of 68fps afterwards, when flying over texture-heavy Seattle.

The PC version is still running on DirectX 11 with this update, although Asobo plans to change it to the latest DirectX 12 in the future. That could bring even bigger performance gains, which could be very exciting for those looking to run the game on lower-end PCs, or to match the refresh rate of the best gaming monitor.