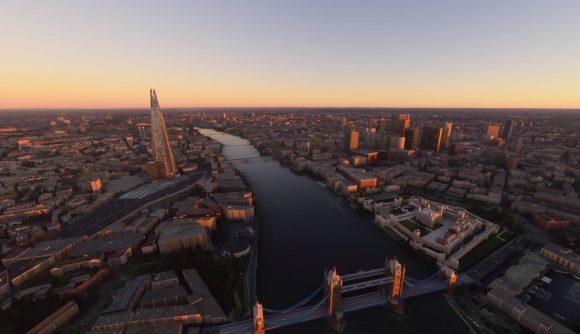 Microsoft Flight Simulator puts the world in front of you and lets you fly off to wherever you want to go. It’s a lofty, charming pitch for a game, but modelling the entire globe is a big ask for a development team to tackle alone. As such, Asobo Studio has used machine learning and AI to help piece the world together. While it’s done a fantastic job on the whole, it has, humorously, got some landmarks wrong.

As spotted by someone on Twitter, the BBC took a tour of London and found that Buckingham Palace has been turned into what looks like an office block from the ’90s. Apparently, everything is accurate from a satellite view, but the AI has to guess what buildings’ textures are. As such, in Microsoft Flight Simulator, the Queen of England currently lives in an office block when she’s in London – enjoy.

That’s not the only fumble either. Some of London’s bridges are also underwater, but still seemingly usable. I looked around on Twitter, and some other people have reported oddities elsewhere. The Sydney Harbor Bridge is missing, and Edinburgh Castle has been turned into an apartment complex. As a somewhat proud Scotsman, the latter hurts my soul.

Apparently, the new Microsoft flight sim has used AI to map the entire world. But it's not done it all that great, and turned Buckingham Palace into a generic 90s office block. https://t.co/hgJnGmauPI pic.twitter.com/KybFG7XOf9

If you do install the PC simulation game, however, do be aware that it is a big boi. The Microsoft Flight Simulator install size is over 100GB, and it’ll only get bigger! Between that and Call of Duty: Modern Warfare, who needs space for photos of loved ones, anyway.