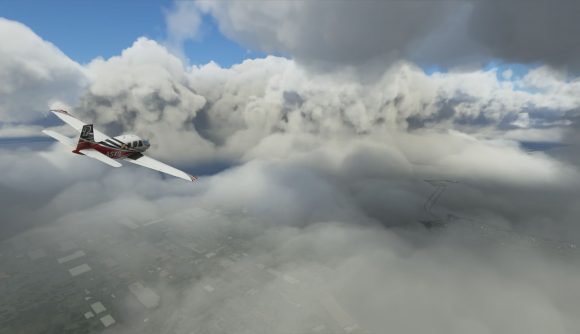 While it’s not adding pretty new sights to the United Kingdom or the Benelux region like some recent World Updates have, the latest patch for Microsoft Flight Simulator is a welcome one. It addresses several persistent annoyances that pilots have been wrestling with for a while now, like inaccurate weather radar and ice that never seems to go away.

The patch notes are extensive, but you can read them in full on the Flight Simulator subreddit. Highlights include some big updates to Live Air Traffic: some aircraft had been using the incorrect model, while others had broken callsigns. These issues have now been addressed, and you should see heavier Live Air Traffic in general now, as well as a boost to the feature’s overall stability.

Asobo has reduced the bandwidth used by weather data in the simulation game, and made fixes to the icing system. This has nothing to do with birthday cakes – icing happens on aircraft wings when it’s flying toward the top of a cold air mass, beneath a mass of warmer air. Here, heavy drops of rain frequently strike the aircraft’s wings and fuselage and, when the temperature is cold enough, freeze into a clear sheen over the aircraft’s surface.

The irregular surface created by the ice has impacts on the aircraft’s performance – it increases drag and makes generating lift more difficult. Modern aircraft are often equipped with de-icing equipment, but pilots can also adjust altitude into a warmer part of the atmosphere. This should cause the ice to melt off on its own, but that hasn’t been happening in Flight Simulator lately.

Once you’ve installed Sim Update 4, this should no longer be an issue. You’ll also be better able to avoid icing altogether, since the update also reworks the weather radar to show actual precipitation rather than cloud cover. That ought to clear up at least a few navigation questions.

As usual with these updates, you’ll see an initial patch in either the Microsoft Store or your Steam library. Once that’s installed, you’ll have to install the rest of Sim Update 4 from inside Flight Simulator.