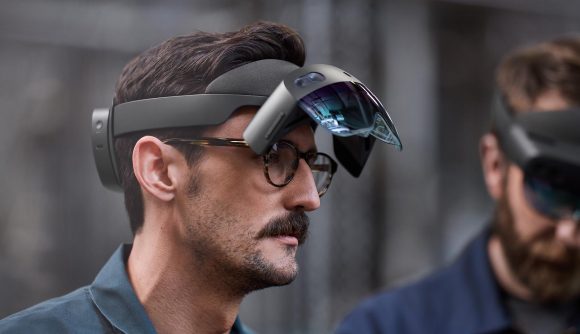 Augmented reality has been at the forefront of Microsoft’s Mixed Reality platform ever since the introduction of the first pre-production HoloLens kit launched in 2016. The first-gen unit’s postage stamp area of effect was rather disappointing at the time, but Microsoft is promising a “greatly increased field of view” with its second gen design.

But there is a caveat. Microsoft’s HoloLens 2 will cost $3,500. If you hadn’t guessed from the price tag alone: this isn’t a consumer device. While the first-gen device was teased with a little Minecraft gameplay, there’s not a game in sight with the second-gen unit. Instead, Microsoft hopes HoloLens 2 will find a home amongst surgeons, designers, engineers, and elsewhere in the enterprise world. Microsoft is seemingly leaving gaming AR to Magic Leap.

Here are the specs for the Microsoft HoloLens 2:

The announcement shortly follows concerns for Microsoft’s latest military contract, IVAS. Microsoft has experienced significant flak for its decision to sell 100,000 bespoke HoloLens headsets to the military. Though the company netted a $480 million contract from the deal, its employees have voiced strong concerns over this use.

“We did not sign up to develop weapons, and we demand a say in how our work is used,” an open letter from Microsoft workers reads.

On behalf of workers at Microsoft, we're releasing an open letter to Brad Smith and Satya Nadella, demanding for the cancelation of the IVAS contract with a call for stricter ethical guidelines.
If you're a Microsoft employee you can sign at: https://t.co/958AhvIHO5 pic.twitter.com/uUZ5P4FJ7X

And Microsoft isn’t without rivals in the market, either. It is facing Magic Leap: a company with a contentious past hoping to take the top spot in the budding AR market.

The Magic Leap One is a standalone AR device powered by LuminOS and complete with controllers and ‘Lightpack’: a pocket-sized processing hub packing both the CPU and Nvidia Pascal GPU for the device.

With Microsoft now incorporating all the necessary components into the headset itself, and offering controller-less hand tracking, the Magic Leap One may have some stiff competition. It is, however, cheaper at $2,295.

Microsoft’s Windows Mixed Reality platform was recently shunned from its affiliate commission program. While the flagship HoloLens product is safe and sound, the move incited doubt about whether the VR platform will continue – especially as the company has reportedly shown little interest in VR development for Xbox.

Power VR: These are the best graphics cards for virtual reality.

The HoloLens 2 can be pre-ordered right now, either device-only or bundled with Dynamics 365 Remote Assist. There’s no official word on the exact shipment date as of yet, but it’s expected to be later this year.

Oh and remember Microsoft Kinect? That’s back as Azure Kinect DK, taking the once Xbox bundled sensor accessory and combining it with Microsoft’s AI smarts for $399.