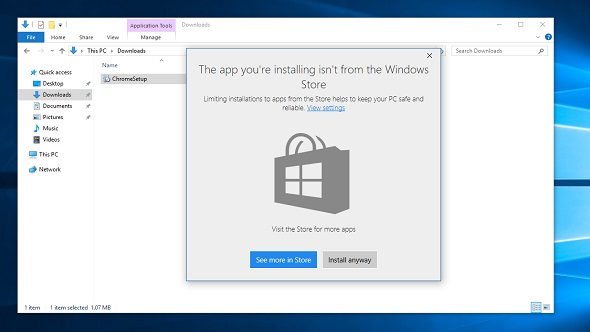 In the upcoming ‘Creators’ update for Windows 10, Microsoft are planning to add a new feature which attempts to block the installation of bloatware on a person’s computer. This new feature has Windows 10 throwing up a user warning whenever someone tries to install an app not bought via the Windows Store.

If you’re looking to speed up your rig, check out our overclocking guide.

This sounds innocuous enough—Microsoft are just trying to protect Windows 10 users—but the problem arises from the message this warning box presents whenever someone tries to install a Win32 program for example. This warning has been added under the guise of keeping the PC “safe and reliable”, framing non-Windows Store apps as somehow dangerous.

The added problem with this feature as it interferes with many perfectly safe programs which use Win32, like Google Chrome, Steam, Photoshop and even older versions of Microsoft Word. While useful for new computer users who have a propensity to install anything that looks interesting, including malware, it’s disconcerting to see Microsoft treat non-Windows programs as inherently threatening to a user.

At the moment, this feature is disabled by default, with users being able to swap between just having the warning box appear or outright banning the installation of Win32 programs. Microsoft is working on a new Windows 10 SKU as part of their push for the Universal Windows Platform, which apparently has this feature enabled as standard. For anyone who uses any other service besides the Windows Store to play their games, or just uses general Win32 programs, this update sounds like an absolute nightmare if the option is hidden deep within submenus.

The ‘Creators’ update which includes this feature is set to launch sometime in April, so time will tell if this feature is kept on as standard. I’m sure other developers will not take kindly to this feature, especially as it treats their safe programs as potential malware or bloatware.