As of this month Windows 10 now commands over 50% of the total computer operating system market. Not bad for an OS that’s only… wait, it came out when? Damn, it’s taken more than four years for Windows 10 to hit that mark and, worse still, it only actually managed to overtake Windows 7 in the market share war in December last year.

On its fourth birthday in July Windows 10 held just shy of 49% of the market, but as of August it’s pretty much sporting 51%, with essentially all of those percentage points coming from a corresponding drop in Windows 7 usage. But still, it’s worth pointing out that Win7 is the second most widely used OS in the world, with over 31% market share.

Compare that with its closest rival – Mac OS X 10.14 at 5.7% – and it’s clear that the two big Microsoft operating systems are more than dominant. Now I am an unashamed Windows apologist – I even loved my Nokia Windows Phone, and that’s a terribly uncool position for a tech journalist to inhabit – but I reckon Win10 is a great OS.

Normally us journos ought to be gushing over the Jobsian wonders of Mac OS X, or extolling the virtues of living life in a Linux terminal. But, while I am a 40 year-old man with a beard, I can’t fit into skinny jeans, I don’t have any tattoos, and there’s no way in hell I could ever pull off a top-knot. Essentially, I’m not alternative or wannabe-cool enough to side with the OS underdogs. 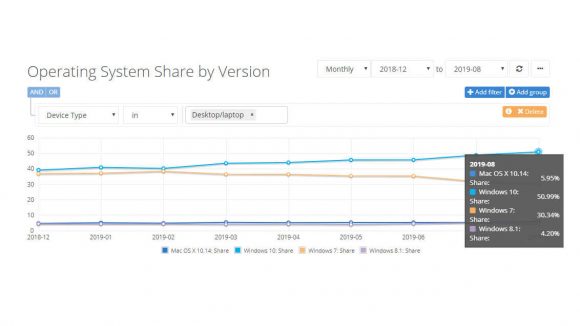 I just want my operating system to mostly function, give me the access and tools I need to fix whatever inevitably does go wrong – without needing to prostrate myself at the feet of a polo-necked Genius or swallow a Linux for Dummies paperback – and have it give me unfettered access to my entire PC gaming library.

And Windows 7 and 10 do that all perfectly. Which is why 81% of the PC market uses Microsoft’s ubiquitous OS, and why there are still more Windows 8.1 users out there than run Linux.

Hell, there are still more Windows XP folk out there than Linux users…

Which OS do you run on your main PC? Join the conversation on this article’s Facebook and Twitter threads.