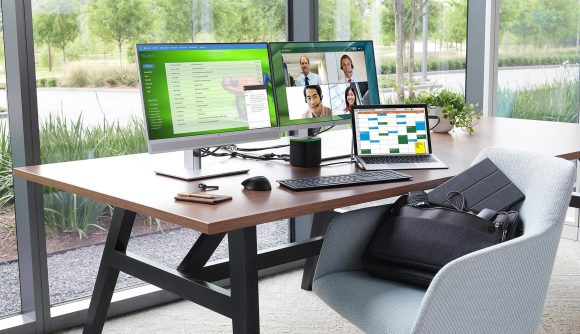 Windows 10 doesn’t always play nicely with multiple monitors, often flinging apps from one screen to another when you wake the operating system up from sleep. After nearly six years of dragging apps back into place manually and makeshift solutions to curb the problem, Microsoft is finally doing something about it, announcing that apps will stay put in a future Windows update.

Considering app arrangement was a core part of Windows 10 at launch, with the Snap Assistant and an assortment of keyboard shortcuts, it’s largely been pushed to the wayside since. Rapid Hot Plug Detect (Rapid HPD) has been around since 2015, and is the reason why DisplayPort multi-monitor setups experience unwanted desktop rearrangements, according Microsoft program manager Michelle Xiong. It’s particularly problematic if you’re connecting the best gaming laptops to an external monitor, as they rely on power saving modes to preserve battery.

The fix is still in early access on build 21287, currently only available to those enrolled in the Windows Insider program. If you don’t fancy participating in the beta test, then you’ll need to wait until at least October, 2021 to get your hands on the final version of the update, as the impending May update is expected to be the earlier 19043.928 build.

Once you’ve downloaded the right update – which you can check by heading into Settings > System > About and looking in the Windows specifications section – you don’t need to do anything else, as the solution is active by default.