Microsoft really are setting out their stall as the budget airline of VR. Back in October they announced to the world their intentions to bring a new range of VR headsets to the market, starting at $299, and now the minimum specs for those devices have been revealed. And boy, are they minimal.

Hardware is nothing without software, so what are the best VR games to play with your headset?

As part of the latest test build of Windows 10 – currently build 14971 – Microsoft have included an app called Windows Holographic First Run. It runs a short background compatibility check to test whether your hardware is good enough to run it virtual and mixed reality headsets. 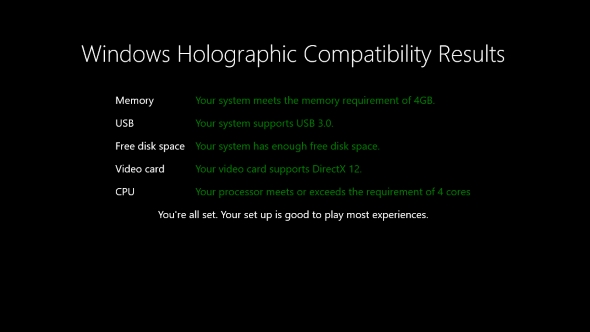 And it pretty much looks like if your PC is capable of booting into Windows 10 then it’s able to match the minimum specs for Microsoft’s VR ecosystem. You don’t have to go to the effort of loading the app or switching over to the test build of Windows 10 ‘cos the specs are pretty basic.

The only thing in there which might be an issue for older machines is the necessity of DirectX 12 hardware, but it doesn’t seem like it’s particularly fussy over whether that’s a discrete card or integrated graphics. It seems to be happy even if you’re just running from your DX12-compatible Intel GPU or AMD APU.

Which would also mean the experience isn’t meant to have the same level of fidelity as the far more expensive Vive or Rift headsets which require seriously meaty graphics silicon, even after recent advances in lowering the graphical specs for high-end VR devices. 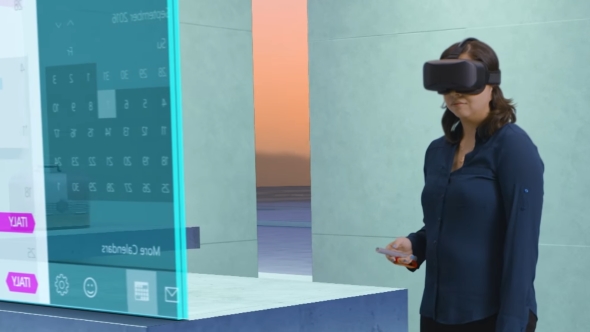 It has to be said that these are the minimum specs though and may just be what your hardware needs to be to enable you to stick on a budget headset and check your Outlook calendar on the kitchen wall. It may be that higher-spec PCs and/or headsets will be capable of the sort of gaming experience we crave from VR.

We don’t have a timeline for when the first batch of new VR devices are set to appear, but Microsoft are working with HP, Acer, Asus, Lenovo and Dell to get these third-party products out into the wild. Will these more basic, budget-oriented headsets be able to further the VR cause? Only time will tell.

Personally, I’m kinda sceptical that low-end VR is going to do anything other than put people off. Having spent the weekend going deep with the Vive on a GTX 1070 laptop, and still having to run most games on pretty low settings, it’s obvious you need a whole lot of power to get the sort of experiences that we’ve been promised by manufacturers, developers and Hollywood.