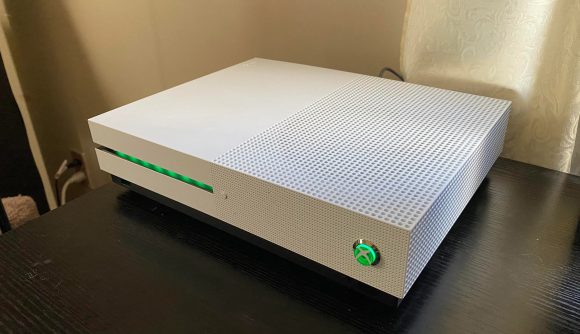 This is one of the neatest small form factor gaming PCs we’ve seen. Reddit user Markker2992 has taken the shell of their old Xbox One S and brought it up to date by managing to fit an entire PC inside. Some bodging was clearly required.

Markker2992 has turned an outdated Xbox One into something that’s got similar performance to the new Xbox Series X. The specs include an 8-core AMD Ryzen 3700X, an RTX 2060 graphics card, and 32GB of RAM. They’ve also made use of an external laptop power brick, due to the size, and a low profile Noctua fan to cool the CPU. Game loading times should also be super fast thanks to a 2TB NVMe SSD – ideal for gaming compared to its slower SATA based cousins. Check out our best SSD for gaming guide if you still haven’t made the switch to solid state.

The parts used will have cost the user around $1300, so this is an expensive rig – and that doesn’t include the cost of sourcing a broken Xbox to place the PC in, unless you already had one lying around. The rear is apparently just open at the moment but they plan to add their own rear IO plate to neaten things up a little. The GPU sticks out the back a few millimeters too, which is, er, not how to build a gaming PC.

Other modifications made include a new power button due to clearance issues, an extra exhaust fan, and extra holes drilled into the top to help with ventilation. Despite the size, the temps are still nice and cool with the CPU reportedly reaching 75℃ under load and the GPU at 80℃ respectively. There’s no space to keep a disc drive, which would largely be unused anyway, so that empty space has been replaced with RGB LED lighting for extra PC build points.

You can view the whole build log, the problems incurred along the way, and the finished product here on imgur and the Reddit thread here. Getting all the cables sorted was tricky but it still looks pretty organised under there. This build is proof that if you manage cables just right, even the smallest PC builds can still be organised – it looks like this Reddit user is a pro at it already!