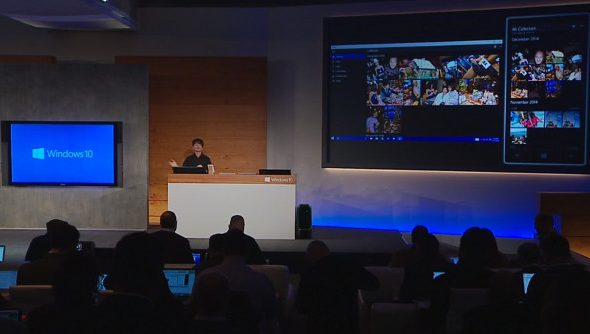 Microsoft just announced a slew of new gaming-related initiatives for Windows 10 that seek to integrate some features of the Xbox One into Windows itself… and to unite your Xbox One and your PC in gaming harmony inside your own home.

It’s an odd list of features, but let’s dig in to what you’ll be able to do with Xbox on your PC inside Windows 10.

OK, so first a big sigh of relief: nothing Microsoft did or said at their press conference for Windows 10 indicated any renewal of the self-destructive Games for Windows DRM war. Microsoft doesn’t seem to be trying to crowd out Steamworks, or coerce users into playing PC games through some kind of Windows marketplace. Rather, the focus seems to be on making the Xbox One more appealing to PC gamers by making it play nicely with your PC.

Microsoft showed the an Xbox Live app running on Windows 10, along with some of the Xbox One’s signal features (like recording and publishing game clips). It has all the social stuff you might expect, plus a list of library games.

Microsoft’s Phil Spencer even showed these features working with Civ Beyond Earth, running inside Steam. Then, with the press of a hotkey, you can apparently snap into the Xbox Live interface and publish your clips.

Microsoft also made some rather extravagant claims about what DirectX 12 will do. They have focused more on the mobile market and efficiency, promising to have cut power consumption during play on phones and other mobile devices by half. They also claimed that by giving developers more control over the CPU and GPU, DirectX 12 will enable performance increases of up to 50%.

Obviously, that would be amazing. It is also a quintessential, “If it sounds too good to be true” statement.

That’s an interesting feature, though Microsoft didn’t seem to indicate that you would be able to play PC games on your Xbox. Right now it seems like a one-way connection, from Xbox One to PC. A nifty feature, but can you imagine if it worked both ways? It seems to me that getting your games from your living room to your PC is a little less desirable than having it work the other way.

But Microsoft did tease lots more game-related announcements at GDC, so we’ll have to wait and see.