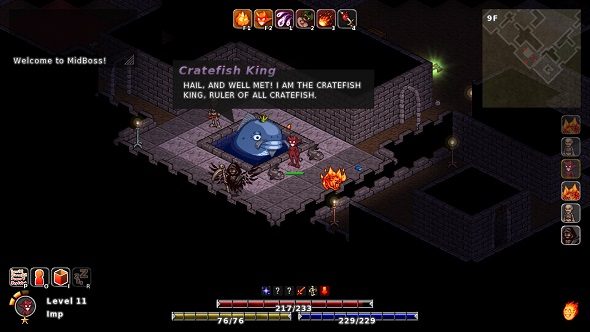 Currently playable via itch.io and in Steam closed beta, the body-swapping roguelike MidBoss is coming to Steam on May 23. Casting players as a lowly imp sick of their lot as the weakest monster in the dungeon, MidBoss has players hopping between bodies on the way to becoming the final boss.

For more fun with ghouls and goblins, check out these top-class PC RPGs.

After defeating a fellow monster in battle, players can then take over their body to continue their quest down into the dungeon’s depths. Every monster has a unique skill, with your repertoire of abilities growing as you get deeper into the dungeon. You can revert back to your imp form at any time, if a certain ghoul or ghost isn’t quite doing the job. Be aware that like most roguelikes, dying resets your progress and sends you right back to the dungeon’s opening.

Rather than just a game-over screen though, MidBoss players will gain a special ‘death card’ which details what ended their run. While not ready at this time, you will be able to share your death cards via Twitter, with players then being able to import the data saved on that death card to see if they can improve on your run. Think of them as personalised world seeds, like you’d see in another roguelike like The Binding of Isaac.

Along with the death cards, one of the major features of MidBoss is the multitude of ways you can tweak a campaign. Rather than being locked into your standard normal and hard mode runs, MidBoss allows dungeon runners to tweak elements of dungeon generation like the standard size of a floor, your experience multiplier, the drop rate on rare items and so on. You can make a run as easy or as difficult as you want, with MidBoss also offering a Quick Play mode for imps in a hurry.

MidBoss seem suited to roguelike players of all abilities then, as veteran adventurers can crank the difficulty straight up to high while new explorers can break themselves in gently. If you want to jump straight into MidBoss now, you can buy the Windows beta over on itch.io for $14.99. Those who purchase via itch.io will also receive a Steam key, allowing them to play the Steam closed beta version if they desire. MidBoss will stay at $14.99 on launch, with early adopters getting access to a special platinum death card border upon the full release.

While it says May 24 on its Steam page, MidBoss will release first on Windows on May 23.