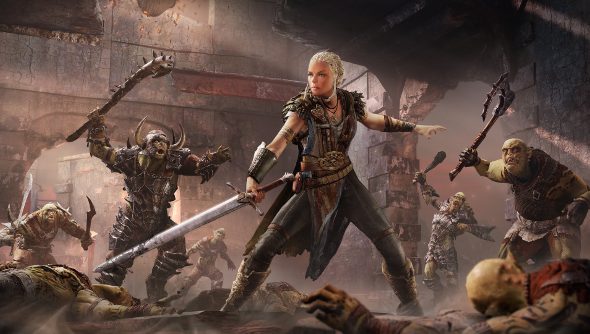 Talion, the square-jawed, moody hero of Middle-earth: Shadow of Mordor, is a real downer. His family and friends are all dead, so he’s got an excuse, I guess. But sometimes it’s a bit heavy, and it would be nice to escape from the escapism of playing a miserable killing machine.

The good news, then, is that Warner Bros. have added another skin, free of charge, and you can now run around, kicking the crap out of orcs, as dreadlock-sporting commander of Nurn, Lithariel.

Talion meets Lithariel just before he travels to Nurn, but now you can play as her whenever you want. She can kick just as much orc arse as her ranger counterpart, but if you’re looking for a bit more of a challenge, then you can check out the Test of Defiance, a new challenge mode where there’s no cheating death and no wraith powers.

A new epic rune has popped into existence as well, which confers and extra last chance attempt when the fighting gets a bit overwhelming. It’s a lifesaver.

All of this is free and should have been automatically added to your game. Not that I need much of an excuse to murder lots of orcs, but I think I might have to jump back in myself.