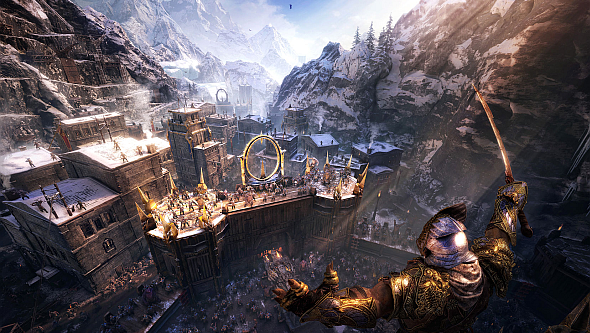 We got a closer look at Shadow of War’s gear upgrade mechanics in a new video yesterday, courtesy of IGN. It’s a detailed look at how, as returning protagonist Talion, you’ll hunt down and upgrade new pieces of equipment, and can tailor your loadout to your gameplay (and cosmetic) preferences.

Add to your growing trove of forbidden knowledge – here’s everything we know about Shadow of War.

Though in the first game you could only upgrade Talion’s starting weapons, this time round you can change his sword, dagger, ranged weapon, armour, cape, and the runes on his Ring of Power (in case you didn’t know, you’ve forged your own Ring of Power this time around). Changing the gear in these slots will have a clear impact on Talion’s appearance.

But don’t think you can’t still upgrade your equipment. In the video, the player hunts down an epic-level enemy who drops a new dagger, which comes with a challenge to further empower it. By stealth-attacking an enemy who is on fire, the dagger gains a big 38% damage bonus against burning enemies, and the player brings down a troll in short order using this power. You can also spend currency to unlock sockets for gems, which are dropped by powerful enemies – the player brings down a Graug and sockets the spoils.

Not content with his looting thus far, he next goes after a legendary enemy who may drop corresponding legendary equipment – “the best we can find at this point in our journey”. The target is an assassin-type orc from the Mystic clan, with several strengths and deadly abilities. When beaten, he drops a legendary rune – runes act like equipment, but are added to Talion’s Ring. The new rune has several bonuses, with more to unlock, and is also part of a set – the player concludes the video by showing Talion with a full set of matching equipment across all his slots, giving powerful bonuses.

While the loot enemies drop is determined by RNG as always, your choice of which to use, which to upgrade, which gems to socket, and which equipment sets to pursue should allow you to lean in to your playstyle as you see fit. And on that note, a previous IGN First walked us through the skill tree, so you can get a further idea of the different ways there are to play this time round.