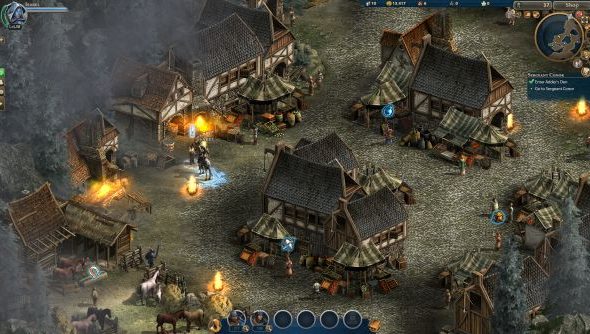 The Might & Magic Heroes series has been around long enough to make it through the confusing IV-V-VI middle stage of roman numeral sequalisation. And like any PC-only series that allows itself to get comfortable, it’s grown an MMO.

Might & Magic Heroes Online is a free-to-play strategy game for generals with names like L33royJank123. It’s launched in English-speaking browsers today.

Players will fight in turn-based tactical battles, like they always have. But the metagame here isn’t a Civ-style overworld affair – it’s an isometric map players will trot about on horseback with every other would-be hero (or antihero – there’s a Necropolis faction). As they do so, they’ll collect a standing army of mercenaries and fantastic creatures.

First impressions are that it’s a little economic in the animation department, but a solid enough engine for satisfying lunchtime bouts of strategy.

The game picked up a few new features in its limited beta earlier this year – siege battles, ‘forgotten site’ quests and a PvP arena. Beyond that, there’s the good stuff you’d expect from an MMO: friends lists, guilds and co-op.

“Listening to player feedback and incorporating community ideas has helped the Blue Byte team make Heroes Online the most accessible game of the series,” say its developers, “while still offering challenges for both veterans and new players.”

Are you lot interested? Strange Canadian spin-off Clash of Heroes is still my favourite entry in the series.