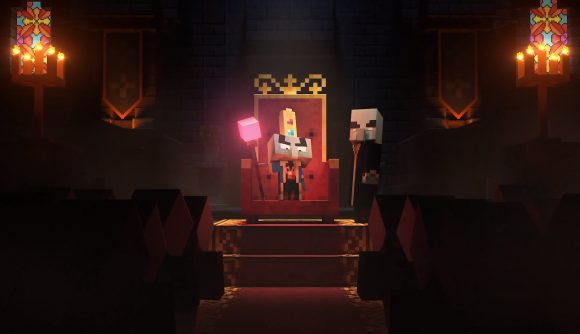 Minecon 2019 is underway, and it’s bringing us plenty of announcements around the world’s biggest sandbox – plus details on some other closely related games. We’ve also got some new info on the blocky Diablo-like, Minecraft: Dungeons, including a fresh trailer and a new look at how the game’s four-player co-op works.

As previously announced, Minecraft: Dungeons has drop-in, drop-out co-op, which will dynamically adjust in difficulty based on the number of players. During the Minecon presentation, we got a look at how players can simply pick up a controller and hop into the action, using enchanted items, spells, and combat in Diablo-style isometric gameplay over randomly-generated levels. It’s action-packed and the new spell effects look terrific. One artifact you can find will summon a war llama who will arrive and help you out in battle.

Minecraft: Dungeons lists inspirations as far-ranging as Diablo and Left 4 Dead, so clearly it’s a massive divergence from its block-building forerunner – though perhaps no more so than the likes of Minecraft: Story Mode.

As for the new cinematic trailer, the Minecon team showed off Minecraft Dungeons’ full opening cinematic, which tells the story of how a lost villager becomes the Supreme Illager. He’s the guy you’ll be after as you fight for loot and gear in Minecraft Dungeons.

What happens when a lonely, outcast Illager stumbles upon a mysterious object with terrifying powers? Find out in the all-new Minecraft Dungeons opening cinematic, then sign up for a chance to play first!

Minecon has also brought us details on Minecraft Earth’s early access launch, which is set for next month, as well as info on the new biomes and Piglins on their way to the Nether.

The Minecraft: Dungeons release date is due for sometime in spring 2020.