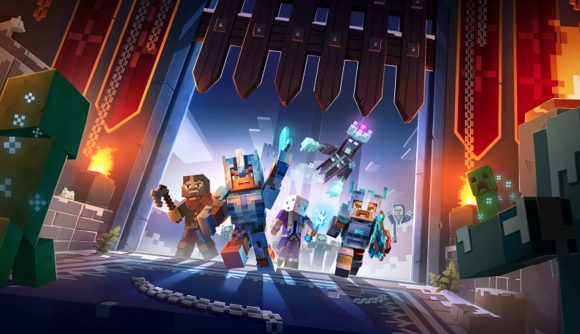 The next Minecraft Dungeons DLC, Creeping Winter, is coming very soon, and developer Mojang has revealed some of the gameplay additions coming to the action-adventure game.

One of the main attractions coming with the icy expansion is the daily trials, a fresh challenge every day that requires you to complete a level under specific criteria. “When you play daily trials, those are always a little bit more challenging than regular base missions, and they also give higher rewards,” Man Olson, the game’s director, says. “In the Creeping Winter DLC, if you play apocalypse seven, and you play a daily trial on top of that, you get higher powered gear than you’ve seen before.”

Another mechanic being added is slippery ice, a time-honoured trope of adventure games. “That will take fights that we have in the base game, and make them feel really interesting and different from what they do normally,” Olson explains. “Fighting a creeper is one thing, but fighting lots and lots of creepers while sliding around on the ice is something completely different.”

Although Creeping Winter is paid DLC, the team remains committed to free updates to enhance what’s already there for everyone, especially in the endgame. “We will have things like endgame content, and endgame features, where players who want more of a challenge, and want to tickle the treasure collection, fancy a bit more, they will have lots of stuff to look forward to,” executive producer David Nisshagen said. “Also, how can we experience the content and the levels in a different way? That’s something we want everyone to be able to join in on.”

You can view the full developer diary below:

Creeping Winter is the second Minecraft Dungeons DLC, after Jungle Awakens, and it launches September 8.