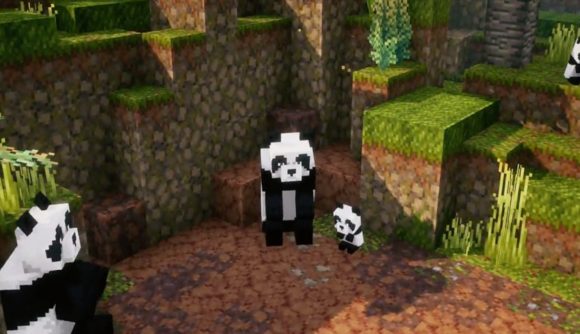 The Minecraft dungeon-crawler spinoff Minecraft Dungeons has its first DLC on the way, and developer Mojang has announced a definitive release date. Fans of the blocky Diablo riff can dig into Jungle Awakens on July 1.

In less than one week (ta, Eurogamer), players can begin exploring the next chapter of the Minecraft action-adventure game. As the name implies, you’ll be journeying through a “distant, dangerous jungle”, where you’ll happen upon the Lost Temple, a fresh dungeon to complete that holds three new story missions, and have to defeat the Jungle Abomination. New weapons, armour, and artifacts are included, as are several new animals, including the Leapleaf, Jungle Zombie, Poison Quill Vine, and the Whisperer. Oh, and pandas.

This is the first of two DLC packs planned for Minecraft Dungeons this year. The second is Creeping Winter, which involves some “frozen peaks” but hasn’t been dated yet. Both Jungle Awakens and Creeping Winter are available through Minecraft Dungeons’ Hero Pass, which came with the Hero Edition of the game if you ordered it, otherwise you’ll have to buy it separately.

Mojang has confirmed it’s working on cross-platform multiplayer, promising an update sometime soon. In other news, Minecraft recently headed up the 2020 inductees into the World Video Game Hall of Fame.