Minecraft Dungeons is the upcoming dungeon crawling action-RPG from creators Mojang, in which up to four players adventure through levels to defeat the evil Arch-Illager. It’s undeniably gorgeous, with most of the Minecraft beats you’d expect – from roaming mobs to pretty biomes – but sets the building and crafting core of Minecraft aside.

The closed beta starts with a swift tutorial level and a quick update on the story that sets out the Arch-Illiger’s nefarious plans. After that, I’m let loose in the campsite that serves as a base between missions. Here you can spend time adjusting your build, upgrading item abilities, and buying random loot from wandering traders or the village blacksmith. There’s also a mission table with a map laid out for you to select your next quest. Missions go a little something like this: defeat the enemy mobs, save the village, repeat. It’s not dissimilar to other dungeon crawlers, which have you clear out waves to achieve a goal, but – in this early showing, at least – it can quickly feel repetitive, maybe even a little mindless.

I play both in solo and with other hack-and-slash fans. Although you can chat over a headset if you’re playing online, or discuss strategy with your partner if you’re playing local co-op, my group never has cause to communicate – , instead we move silently, but efficiently, through each level, never finding it difficult enough to warrant a coordinated plan. You can tinker with the difficulty settings using a threat slider if you fancy more of a challenge, and doing so both ups the number of enemies you’ll come across and adds in tougher mobs. However, even if you do die, it’s not that punishing – you’ll respawn close by with enemies on the same amount of health they had when you died, and in multiplayer you can revive your pals. If you cark it three times it’s game over and you’ll return to camp, but it’s not the end of the world as levels are relatively short.

All of this makes me wonder who Dungeons is for? Minecraft is for everyone, but top-down, intense RPGs like Diablo and Path of Exile cater to more specific tastes. There’s a level of depth that comes from combining and forging items, using abilities in the most impactful way, and spending hours pouring over a character build. Minecraft Dungeons, however, doesn’t have that level of complexity. I can’t help feeling too old for the game, or that I would have appreciated it a lot more [REDACTED] years ago. It certainly feels better suited to a younger audience, and I can imagine it will make a wonderful family game.

Games to play together: The best co-op games on PC in 2020

In that context, at least, the lack of complexity could be seen as a boon. In Dungeons, you are what you wear, so you can build yourself out as a ranger with a bow and arrow, or give wield a sword and heavy armour to become a warrior. Sampling different outfits and abilities is easy to do, as there’s an abundance of loot – and it’s always exciting when you come across it. 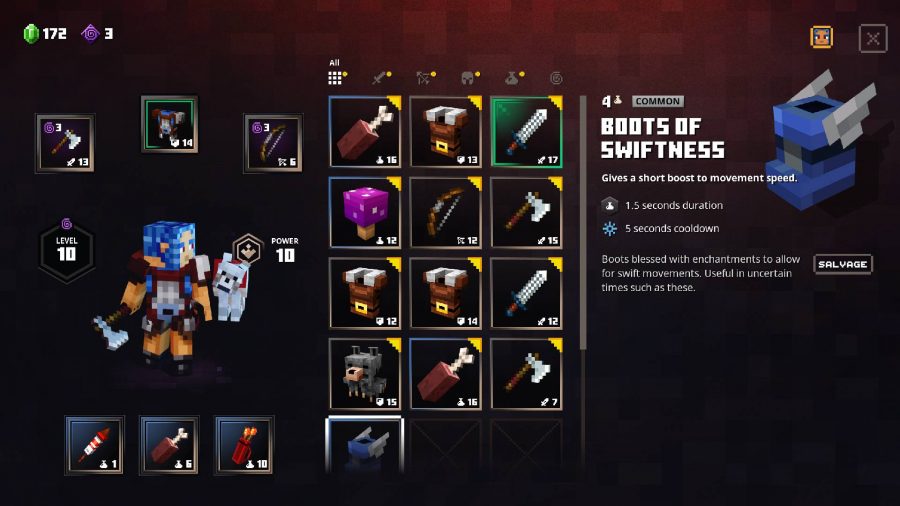 Each procedurally generated level is mostly linear, but each offers a handful of paths you can wander down to discover hidden rooms, chests, and secrets. There are new and intriguing mobs, too, such as the piggybank (a walking lootpig, it’s amazing) and eerie skeleton horsemen. The procedural generation, difficulty settings, and new mobs add to the replayability of Minecraft Dungeons – which is just as well – as a playthrough of the main nine levels won’t take very long to complete.

All that aforementioned lovely loot is another reason to keep coming back, of course. You can upgrade your spoils at camp, enchanting weapons and armour with special abilities. Discussing different builds with your party is fun (I didn’t keep schtum for my entire time in the game) and there are plenty of enchantments to experiment with. The camp is also a place you can spend Dungeons’ in-game currency, emeralds. I say spend, but the village traders are more like big-nosed slot machines, offering up a random item based on your current level. I did this a few times but the items were never as good as those I found in the levels. 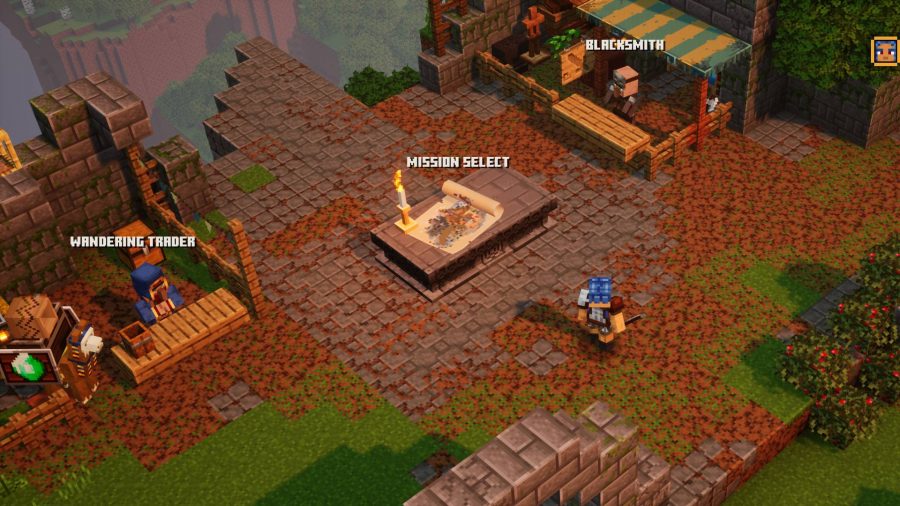 Minecraft Dungeons is incredibly smooth, the gameplay is polished, and the transition between levels is seamless – but for all of this it feels a little lost. There are obvious parallels between Dungeon’s setup and the main game’s mob-saturated, murky spelunking. And the colourful blocky aesthetic we all know and love is also present and correct, along with a good helping of Minecraft’s cheerful, off-kilter spirit. But even with all of this, it just feels worlds away from being Minecraft anymore. You can’t customise your appearance or scavenge for resources, and you can’t craft or build anything. That’s by design, of course, and experimental off-shoots are to be encouraged. But Dungeons can often feel like a Minecraft-shaped block trying to fit into a Diablo-shaped hole.