Well that didn’t take very long. The above image is the aftermath of an American invasion of Denmark. In Minecraft. Last week, the Danish GeoData Agency created a 1:1 replica of Denmark in Minecraft. The goal was to show what can be done with free geographical data, in the hopes of educating children.

It only took a few days for players to level most of the country and build on top of the rubble. American tanks were also spotted in Copenhagen. Evidence of the unwarranted attack was captured by Redditor RandomDKguy.

This blocky fascimile of Denmark’s co-creator, Thorbjørn Nielsen, encouraged players to make changes. Considered changes. Respectful changes. Then America invaded and it all went to hell. 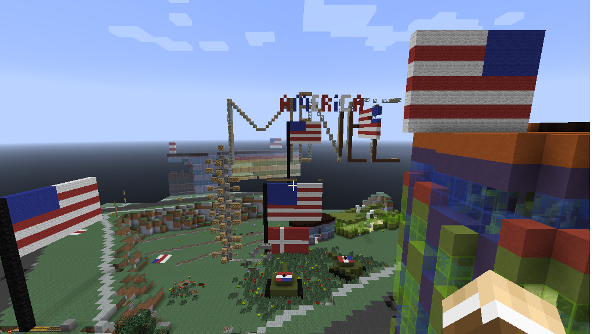 “Several large Danish towns have been levelled to the ground and a lot of new things have been built all over the place,” said Chris Hammeken, the chief press officer at the GeoData Agency. We don’t have a complete overview yet, but we’ll probably choose to reconstruct Copenhagen and the other cities.”

The model will be rebooted, likely with some added restrictions to stop another invasion. You can download the replica of Denmark here, in 10×10 chunks, as it is exceedingly large, being a country and all.

Have you taken a stroll through the streets of Copenhagen and witnessed the devastation yourself?