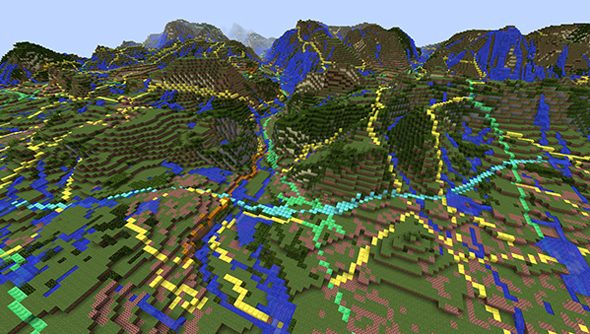 An awful lot of comprehensive geographical, topographical and geological data about Great Britain has been compiled and compressed on computers. And for decades, nobody knew quite what it was for. Some vaguely recalled that we started mapping in the wake of the Jacobite Rebellion, but that no longer seemed particularly relevant.

Then, with a collective sigh of academic relief, we hit upon the reason: it was all necessary to create an accurate replica of the British landmass in Minecraft. Inspired by the Ordnance Survey’s Minecraft map of Great Britain’s mounds and motorways, the British Geological Survey have recreated the real geology beneath the surface – right down to the bedrock.

It’s now possible not only to climb Ben Nevis, but to inspect the white cliffs of Dover or explore the makeup of ancient volcanoes in the Scottish Isles.

The BGS have combined the Ordnance Survey’s surface data with their own knowledge of Great Britain’s parent materials – the rocks and deposits that influence texture, structure, drainage and chemistry in the soil.

BGS geologists matched parent material types to suitable Minecraft blocks. For instance, sand was replaced with the sand block (“That one was easy”), and boggy peat with the soul sand block – “chosen for its sinking characteristics”.

Naturally, there’s a nefarious agenda at work here. The BGS are out to educate young people.

“This work is an outstanding opportunity to get people using Minecraft, especially youngsters, to understand the geology beneath their feet and what it can be used for,” said the organisation’s executive director, Professor John Ludden.

You can download the 6GB map from the BGS site. There, you’ll also find coordinates for particular locations: by default, you’ll start off at the Geological Survey’s Cardiff office.

Our Steve spent some time exploring the Ordnance Survey’s Great Britain – do you think you’ll do a spot of spelunking beneath its surface?