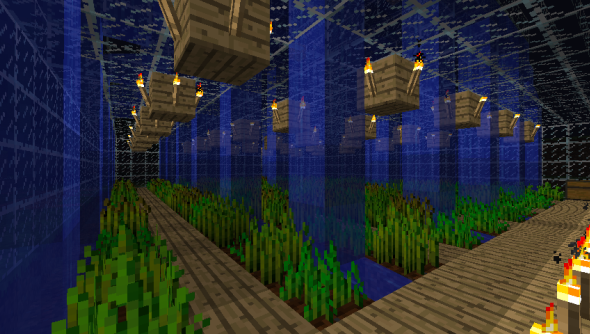 Modjam is a 96 hour competition in which participants are tasked with building a Minecraft project from scratch. Not the usual tools, the pickaxes and shovels and hoes, for them: instead The Code, the arcane stuff the game is made of. Nominally unofficial but run by a member of Mojang’s hallowed Minecraft team, it’s a very special event indeed.

There’ve been several Modjam’s since its inception in the first part of this year, when jam host and MCP creator Searge was but one of the leading lights of community development. His Mod Coder Pack has enabled a burgeoning modding scene for Minecraft, and Modjam was set up to highlight the “significant leaps in creativity, skill, dedication and achievement” that have come about as a result.

A previous winner was Team Metallurgy’sAgriculture, now a regular fixture in popular modpacks.

Multiple categories abound – Modification, Resource Pack, and the new Map Creation – and a sweet touch sees winners rewarded with Next Top Model style guarantees – a place in the next Forgecraft modpack, a spot on the Forgecraft server, and a YouTube feature from Feed the Beast figurehead Direwolf20.

The jam’s beginning is two days and 14 hours away at the time of writing, which would make it Friday. You’ll be able to watch it live on Twitch here. Do you think you will?