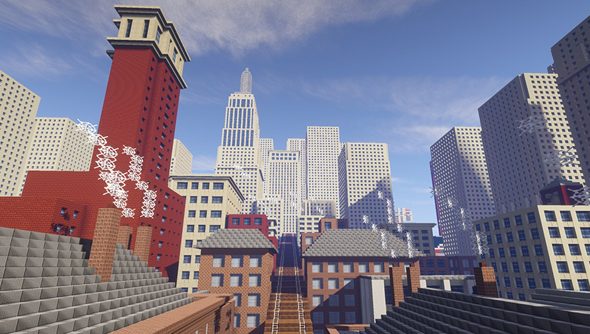 Christopher Nevinson’s 1920 painting of New York, Soul of the Soulless City, is often pointed to as a precursor of the cubist era. Now, in a sense, it’s completed that transition: rendered all in blocks as part of a Tate project in Minecraft.

Nevinson’s painting was adapted for Minecraft and released on Monday, alongside a version of The Pool of London – Andre Derain’s 1906 painting of the Thames. The two maps are the first in a series to be collected under the banner of Tate Worlds – an effort to expose players to the themes and creation of artworks in the gallery’s collection.

“Tate has teamed up with some of Minecraft’s best known mapmakers to create these virtual artworks,” write the collectors, “offering a unique combination of art, history and adventure.”

The maps have been put together by The Common People – a group made up of Minecraft artist Adam Clarke, map maker Dragnoz and builders Kupo, Featherblade and Tewkesape – and are dotted with activities and challenges related to the paintings’ subjects.

Six more Tate Worlds maps are planned for release next year – including Cornelia Parker’s Cold Dark Matter: An Exploded View and The Destruction of Pompeii and Herculaneum by John Martin. They’ll be tied together by the distinctly Minecrafty themes of Play, Destruction and Fantasy.

Think you might want a go on the railway running through the centre of Nevinson’s New York? You can download the first two released maps over at the Tate site. And after that, you could peruse our list of the 50 best Minecraft maps ever made.