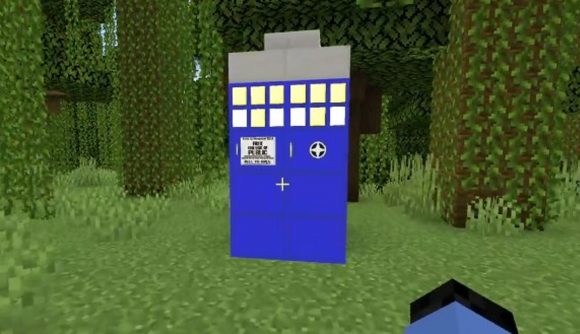 A creative builder in Minecraft has managed to make the TARDIS from Doctor Who, complete with physics-defying entrance. In a video showing off their creation, the “prototype” is, indeed, bigger on the inside.

On Reddit, user SmegaSega posted a clip of their new TARDIS. From the outside, it’s just a typical little blue box, nothing remarkable about it. Then you step inside, and suddenly it’s a spacecraft ready for interplanetary travel. You return outside, and it’s just a normal box again – magic. Doctor Who fans will recognise all of this instantly, and, yes, it’s fun every time the show has somebody be amazed by what’s happening.

In the comments, SmegaSega reveals the secret. Unfortunately, they aren’t a timelord with access to some unique, timey-wimey Minecraft datapack. It’s seamless because it’s teleportation, and the interior has actually been build under the box itself, significantly reducing the pressure on the open-world game to load the new area, and place you in it. The result is a the complete TARDIS aesthetic. All you need now is a fetching costume, a companion or two, and some Daleks, and you could make the next Christmas special if you wanted to.

If you’re looking for a multiplayer Minecraft project, someone made a fully functioning version of UNO. Developer Mojang just fixed a bug that’s been there for eight years. Speaking of long haul ideas, here’s one Minecraft player’s ten year journey to the Far Lands.