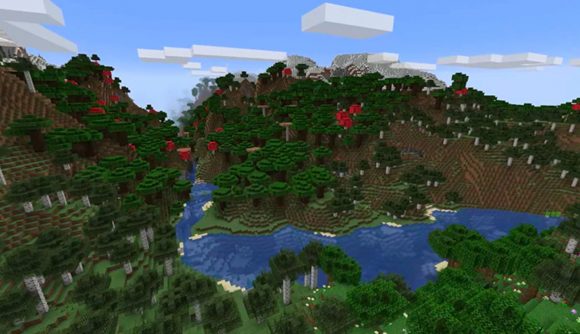 Minecraft is still due to get a host of new biomes for the second half of Caves & Cliffs in 1.18, but the previously announced ones aren’t even the full story. Experimental Snapshot 3 offers another range of adjustments to Minecraft’s upcoming terrain generation revamp, including a pile of changes to make the transition between temperatures more gradual – and that’s required the devs to create a whole new mountain biome variation.

The new stony peaks biome is basically a variation of lofty peaks, which had previously been announced and will also be introduced as part of 1.18. Stony replaces lofty’s snow and ice with stone and gravel, but should still feature peaks up to y260 and allow goats to spawn. Still big mountains, just slightly warmer ones.

Stony peaks are introduced as part of a broader effort to reduce temperature clashes, as compared with the previous Experimental Snapshot 2. You’ll see fewer instances of, say, snowy biomes in the middle of deserts, for example.

You can see the full list of changes over on the official site.

The Minecraft 1.18 release date is due to land this holiday.