Minecraft just got a whole lot sweeter with the addition of Minecraft honey blocks to Java. The blocky addition comes in the most recent snapshot for Java’s upcoming 1.15 update and already has a ton of handy uses, including fall damage reduction and creating a massive conveyor belt of golden stickiness.

In the new update you can also create a decorative honeycomb block, not to be confused with the honey block itself. This stylish sweet treat can be fashioned by combining four honeycombs in the crafting menu. So, if your dream gingerbread house isn’t quite in reach, you can create a Minecraft house built from honeycomb blocks – there’s no stopping you now. If you’re wondering where all this honey is coming from, our Minecraft bees guide will tell you everything you need to know about honey creation, so you can use honey for good – or evil.

Other Minecraft mobs aren’t a fan of walking on honey blocks, so they’ll avoid them if possible – this includes animals, monster mobs, and Minecraft village dwellers. Here’s our guide on how to craft honey blocks in Minecraft and all the uses you’ll get from the latest building block.

How to craft Minecraft honey blocks

You can craft honey blocks in Minecraft by using four honey bottles. You can get honey bottles by using an empty bottle on a hive or bee nest.

How to use minecraft honey blocks

If you place a honey block in a 1×1 hole, any unsuspecting mob that falls in won’t be able to jump out thanks to the gooey substance at their feet – even if the honey block is concealed by carpet or a trap door. We can think of several potential ways to trick our friends with this trap, but it’s also a great method to stop mobs such as villagers and livestock from escaping and wandering around when we need to keep them in one place.

Fun with honey doesn’t end there – several creative players have made Minecraft parkour maps with honey blocks, using the block’s sticky qualities to deftly slide across walls of glutinous amber at high speeds.

Honey blocks and honeycomb blocks are also useful for the cosmetically inclined – they can be used to masquerade as lampshades, headlights, glowing embers, and beer, as well as to activate a secret entrance to your base, as demonstrated by Minecraft YouTuber Grian. 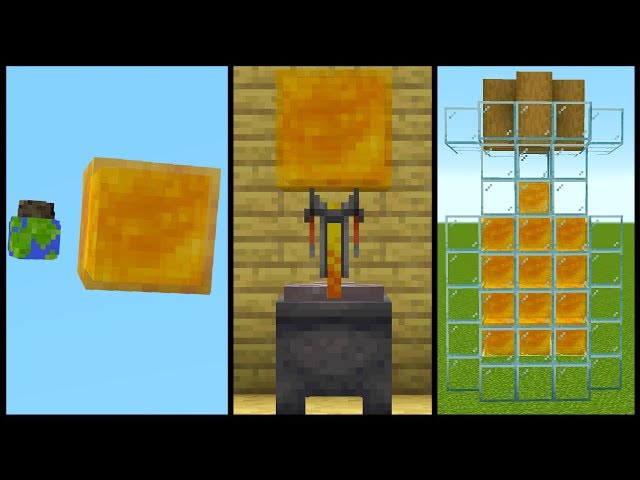 Honey blocks also work perfectly alongside slime blocks to create machines that, thanks to their mixed materials, can bypass the usual 12 block push limit of pistons. You can find a showcase of honey-based creations at the Minecraft blog. For more cool things you can build in Minecraft, see our guide to the best Minecraft builds.

That’s everything we know about honey blocks in Minecraft. These blocks feature in the Java Edition and Bedrock Edition of Minecraft. If you’re looking for the best Minecraft seeds to compliment your honey builds, experiment with your honey in some Minecraft mods, or show off to your beehive with a swanky set of netherite armour, we’ve got you covered.