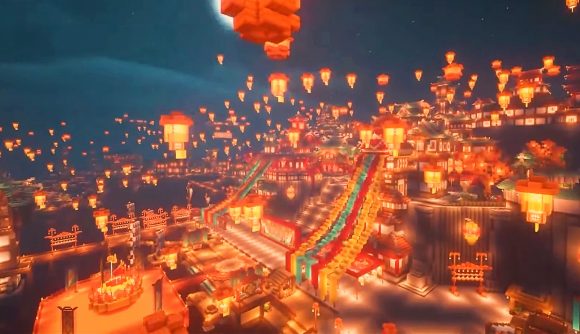 While we’ve seen Genshin Impact fans recreate the odd spot or location in Minecraft, you’ll rarely see someone take on the entire ruddy map. That’s just what one player is doing, though, and the results are pretty marvellous.

晨曦Archi initially posted a video showcasing their work to Chinese video sharing platform Bilibili, though someone brought it to Reddit (below) with the author’s permission. Alongside some high-energy music, you can see the builder’s recreations of old and new Mondstadt, the Dawn Winery, Dragonspine, Liyue Harbour, and much more.

As ever, it’s the more minor details that stand out. 晨曦Archi has nailed Mondstadt’s cathedral while you’ll see through the floating lanterns that Chihu Rock in Liyue is celebrating the Lantern Rite festival. While the prominent locations are impressive, some of the neater details come between them. Journeying from Mondstadt to Liyue typically takes you through the Wangshu Inn, Jaeyun Karst, and Huanguang Stone Forest in the game – all of which have been beautifully recreated here, too.

You can check out the video below:

Genshin Impact but Remade in Minecraft! from Genshin_Impact

If you’re looking for something to do in Genshin Impact, the Windtrace event is rumbling on until January 27, featuring a game mode that invites comparisons to Prop Hunt from Garry’s Mod.

For more anime games or free PC games, though, you can follow those respective links.