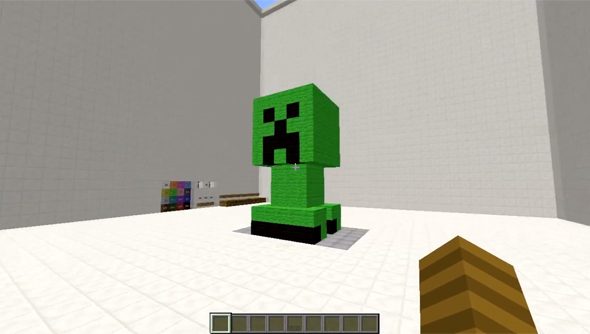 Since the early days of Minecraft, some of Creative Mode’s more scale-tacular achievements have been built with outside help. This one-to-one model of the Starship Enterprise, for instance, was sketched out in 3D modelling software first before its creator imported the vectors into the game, deck by deck. Community opinion is divided on their legitimacy of these creations as Great Works.

There’s no question about the creative capabilities of ItsJustJumby, though – the man behind this in-game Minecraft 3D printer.

Jumby’s stroke of genius is in using the inventory screen of the common-or-garden storage chest as a direct analogue for squares in the world map. Each of his ten chests represents a layer, and by planting wool blocks in the inventory spaces of each he’s able to map out a model.

Once he’s pressed the button, it takes a little over a minute – and, understandably, “a fair bit of lag” – for Jumby’s creeper model to emerge:

Clearly Jumby’s 3D printing is carried out in a controlled space – a massive object-oven that doesn’t make plonking a new design amid your existing building particularly viable. But it’s an astonishingly clever machine, and I’d quite like to have a go. Would you?