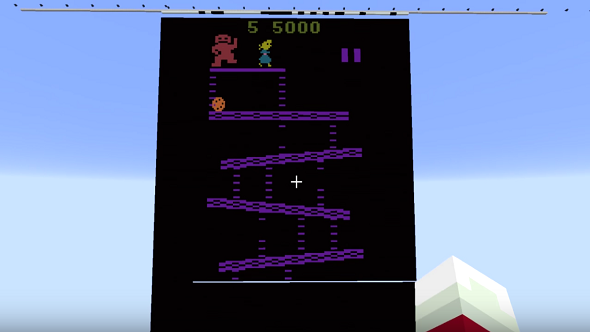 Get inspired to build your own creations with our list of the best Minecraft seeds.

Most impressively, this creation was built in vanilla Minecraft, using no mods and not even a single texture pack. You do need to be extremely clever, however… and patient. You would need that patience to play the thing, too, since it displays the action at 60 frames-per-hour. And you thought a 30fps cap was the end of the world. Don’t you feel silly now?

In the video embedded above Seth kicks things off with Donkey Kong, then he switches to Space Invaders before showing off Pac-Man. The ‘cartridges’ are made up of columns of eight blocks, each a single byte, with mud and stone representing the 0s and 1s of binary code, and 4KB of code per cartridge.

Down on the floor is a massive square of dirt that represents the memory that can be addressed by a6502 processor, the processor in the Atari 2600. If you want to see the full, mind-boggling creation process, check out this other video laying it all out: