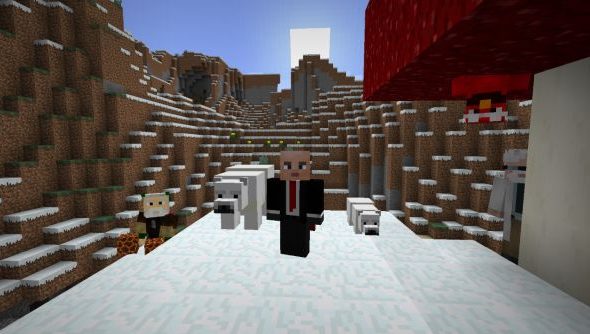 Despite being one of the most popular games in the world, especially amongst kids, it’s not easy to simply jump onto a server with a friend. Setting them up locally requires as much knowledge as your average server admin, while dedicated servers are rarely private enough for quickly playing around with friends. The Realms service that provides servers to your spec is a solution, but costs upwards of $5 a month – not ideal just to avoid the hassle of downloading server software and fixing computer/router settings. Microsoft, however, have no plans to make it any easier on the pre-Windows 10 PC version.

Try the best Minecraft skins – but only on your own.

Our very own Jeremy points out that he’s lost evenings to setting things up every time he’s wanted to have a quick bit of private co-op – something he’s never found in other games. Almost anything multiplayer focused is making it as easy as possible to play with friends now, free of charge, because it’s what keeps people interested.

“We don’t have any announcements for that right now,” says Jesse Merriam, executive producer on the Win 10 edition of the game. “We really are excited about bringing all Minecraft players together. So you’ve seen in this week’s release, Realms you can get to from Windows 10 Edition, as well as all the Pocket Edition platforms, as well as Gear VR. We’re gonna be working on console next – next year we’ll bring console edition to connect into those same Realms that have these same add-ons.”

It’s not surprising that they would rather focus on Realms. It’s a good service for giving players instantly working combinations of maps and mods that they can customise as they like with minimal effort. It also makes a significant amount of money, as you can imagine any service tied so intricately to Minecraft would.

Mirriam says that “beyond that, we just continue to explore different ways to bring people together and let them play multiplayer.”