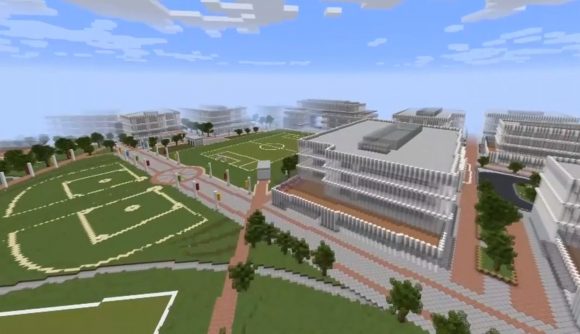 Over the past decade, people have built an awful lot in Minecraft. From regal European palaces to the towering cities of Middle-Earth, the community has poured hours upon hours of time into the most life-like recreations they can manage. But until now, those creations have rarely transferred over into the real world.

Not long ago, Microsoft began putting together plans to expand their headquarters in Redmond, Washington. The building work is expected to be finished in 2022, but the company isn’t planning to go down a particularly traditional route as it plans the layout of its new home.

According to CNBC, Microsoft has hired Blockworks, a company that uses Microsoft to develop real-world projects, to create an interactive scale model of the new campus. Blockworks has previously worked on similar projects for Disney, Warner Bros, and the Museum of London. Back in July, the team put together a digital version of the new 500-acre campus, which will contain more than 100 buildings, as well as cricket and soccer pitches, and retail stores.

What that means is that those employees who want a sneak peek at their new campus – years ahead of schedule – can load into Blockworks’ recreation and wander around at their leisure. CNBC claims that the partnership began when a former member of Microsoft’s real estate team saw his son playing the game, and started considering how the game might be able to help the company with its move.

Of course, that decision was likely helped along by the fact that Microsoft already own Minecraft developer Mojang, making the partnership a little more of a no-brainer. Despite the size and scale of the project, Blockworks was able to have their model of the campus built within just a few weeks. If you want to check it out for yourself, you’ll need to own Minecraft, Education Edition, and then head here to download and explore the current version of the Redmond Campus – Microsoft says it’ll be updating the project over the next few years.