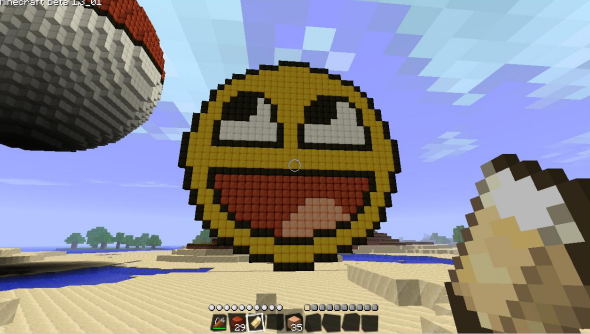 Minecraft’s sales would be impressive alongside any other PC title, but consider too that this is a game that you haven’t seen advertised at a bus stop or on the metro, that you haven’t watched TV spots for or caught on the back cover of a magazine. While most publishers and developers will send press releases by the dozen when they so much as add a single new feature to their game, the most that Mojang tend to bother with is a casual tweet. And Minecraft keeps selling.

I can see us all, ten years from now, in one of those retrospective TV shows, tracing all this back to where it began, talking about the early days of the game before there were bats and squids, before the Nether, before there were half blocks. I think I still have a picture of my first castle squirreled away somewhere. Not my best work, but as I even have a screenshot from the first time I played, you can see how it’s an improvement over my godawful, Frank Lloyd Wright-inspired “Cliffhouse.” I’ve got better since then, I promise.

EDIT: Over on Mojang’s official blog, Notch has been quoted as saying “69I960EHE0A4A0IVG0EHE02500R4R0G1T30PLJ00V6V0EHE0V1U01V10U5U0VGV0V4R.” Does that mean anything to any of you? Is it a (secret) code for something or other, either related to Minecraft or 0x10c? I’ve tried putting it in as a world seed in Minecraft, but nothing particularly unusual seems to occur. There’s a lot of sheep, mind.