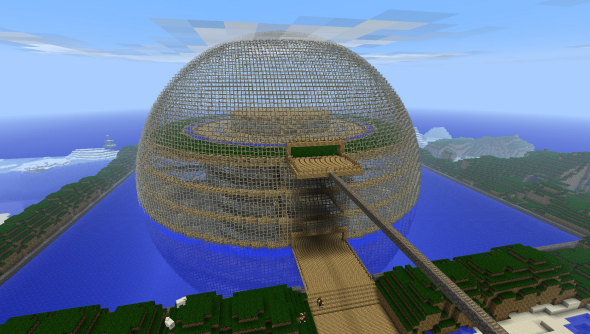 If you’re anything like me, you probably struggle to build accurate representations of circular or curved structures. Your domes look dumb, your arches look awful. Over the last couple of months, I’ve been trying to build more and more round things, such as towers and an arched viaduct, but everything ended up looking either too angular, or weirdly egg-shaped. Then, I found this freeware gem.

The Minecraft Structure Planner(alternative download) runs in Java, much like Minecraft itself, and it can generateplan views, height maps and even 3D projections for a wide variety of shapes, including circles, bridge arches, domed roofs, hemispherical domes and, if should you fancy one, even a torus. You can also ask it to generate mazes, fractals and a couple of stock bridge designs, including a suspension bridge.

When it comes to generating these structures, the program is a little more limited in its scope, but it’s nevertheless a really helpful aid for the amateur builder who can’t understand why their curves look crappy. Unfortunately, the site’s been quiet for a while now and the forums have closed, but you can still download the program which, if you play on multiplayer servers as I do, will do small wonders for your architectural dignity. No longer will your roofs be oddly oval, your towers obtusely ovate and your domes off-puttingly ooidal, It’s time to get those o-shapes right.